i’m curious if that is universally true. and if anyone knows what determines the direction.

I have an MX50A and the internal feedback does indeed go from left to right.

I have some theories as to why this might be, but these theories are based on general principles of video feedback and so can’t really say anything about the specific implementations of the circuits and firmware of the MX50/MX50A. I’m giving a lot of basic details even if I’m sure you’re already familiar with a lot of this, because this might end up being helpful to others who might be newer to video feedback.

Analog video mixers like the MX50 actually do the mixing digitally, There’s an analog to digital converter at the input that converts the incoming video signal to a series of Pixel values (I don’t know the format, but could be R G B, Y Pb Pr, etc.) which are stored in a frame buffer. It does this for both buses (A and B) and the uses those stored buffers to generate the output digitally and store it in a frame buffer. At the output there’s a digital to analog converter that reads from a digital buffer and converts it back to an analog video signal.

If you’ve ever looked at an NTSC composite video waveform then you know they look something like this: 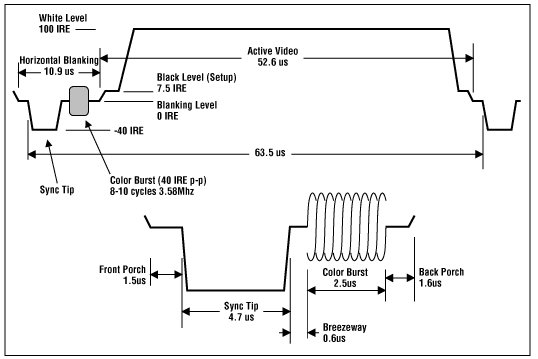 Well if there’s a black pixel at the start (left edge) of every line in the frame, then when you look at the whole frame it would have the appearance of being shifted to the right by 1 pixel. In normal non-feedback use, this really isn’t that big a deal, but when put into feedback, this is applied successively every frame, and from what we know about framebuffer feedback, that would give the appearance of trails to the right.

The Edirol V4 has some settings in the utility section that let you set the horizontal and vertical center of the image to counteract these effects, and thats

Once I got my MX50A, I combed through its manual and the MX50’s to try and figure out what the differences between them were. From what I can tell, the only real difference is that the MX50A claims to be compatible with the Panasonic AG-850 Editing controller, while the manual for the MX50 only mentions the AG-800 Editing controller. I don’t know anything about the specifics of these editing controllers or how they differ in the kind of Serial commands they would send to a mixer, and the specific command lists are pretty hard to come by these days. It’s pretty likely that the AG-800 would work just fine with an MX50. It could also be that Panasonic made some parts substitutions due prices/availability at some point during the MX50’s product life cycle and thought they were substantial enough to change the model name. Hopefully someone else out there has more details on this subject because I’d love to know more.

TL;DR:
The direction of the trails is determined by timing differences between the input video decoder and output video encoder with respect to the horizontal blanking interval. When the engineers at Panasonic moved from the MX50 to the MX50A, whatever they changed (parts, calibration settings, firmware) ended up changing the sign the this difference (from positive to negative or vice versa).

mine goes left to right also.
i mean, all three of mine do

thanks so much for the detailed response!
the digital converter offsetting the image by a pixel or two makes sense. i still wonder what hardware inside could be different.
i use the horizontal and vertical image displacement on the v4 a lot. it is nice to have control over the direction