Well the title says it all. I just saw such a Pulnix progressive scan camera and I was wondering if there is use for it for videofeedbacks? Or any other good uses while working with video?

I’ve never used one (I didn’t even know about them) and I’m just checking its manual (https://www.jai.com/uploads/documents/Discontinued-Products/English-Manuals-Datasheets/TM-Series/Manual_TM-6710CL-revD_Discontinued.pdf).

The manual says its slower shutter rate is 1/250.

In my experience, when re-scanning (or making videofeedback) small CRT TVs, any shutter rate above 1/50 (for example 1/75) will result in undesirable effects; that is, part of the screen will look darker (an horizontal darker bar will show up). As far as I understand, this is because small CRT TVs generally have a 1/60 (60Hz) refresh rate.

As far as I know most displays have a refresh rate slower than 1/250, so I’d expect the same issue to take place…

To add on to what @pixelflowers said, in fact all NTSC CRTs have a refresh rate of 59.94 Hz (and PAL has a refresh rate of 50 Hz). This is defined in the NTSC standard. Because CRTs draw their image by dragging an electron beam across the screen, only one spot is actually lit at any instant in time, but our persistence of vision makes it appear to us that there is a full frame of video drawn.

When you set your camera’s shutter speed to faster than 1/60, the shutter isn’t open for the amount of time it takes for the electron beam of the TV to move across the whole screen, and that’s where the horizontal dark bars come from. Since the relative phase between the TV’s refresh rate and the camera’s stays constant, that’s why bars don’t really move.

This is also an issue with CMOS sensors especially because CMOS sensors expose the image one pixel at a time (this also causes rolling shutter effects when recording fast horizontal movement) compared to CCD sensors, (typically found on older camcorders) which expose the entire image at once.

LCDs, on the other hand, leave the pixels on and just update their values one by one, line by line. I think This video by the Slow Mo Guys illustrates this really well. Practically, this gives you much smoother, reaction-diffusion looking camera feedback, and doesn’t have the same issues with CMOS sensors, at least in my experience.

I checked out the specs on some of these cameras from Pulnix, and it looks like they really expect you to connect it to a computer to look at the output. Some of them allow you to view the output on a VGA monitor, which is how you’d be able to get a 120 Hz progressive signal, but potentially requiring an external frame grabber to do so. You could try doing some high refresh rate camera feedback with a VGA monitor. if

If you want to interface it with other gear, like video mixers or glitch processors, you will need a Scan Converter to convert this VGA signal to NTSC 480i for output over composite video or S-Video. There are relatively cheap ones on amazon that work pretty well, although I don’t know how well they would support high frame rates like 120 Hz or higher. You want something that looks like this: 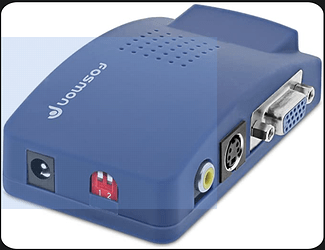 (A quick note: these usually come with a USB to DC barrel plug cable. Make sure that the USB power adapter you’re using can deliver at least 1A minimum, or else you will get a very dark image).

Another option would be to get a more professional quality Scan Converter from eBay, such as the Extron VSC 500. This will give you lower latency than the other converter (which would matter for camera feedback), and the manual states that it supports frame rates up to 120 Hz.

But if the whole idea of these kind of camera is that they produce high refresh rate, progressive scan video but then you have to convert it back to interlaced 59.94Hz to use it with your other gear, you may want to consider a different camera that natively outputs NTSC or PAL in the first place. I still think some VGA camera feedback would be really cool though, so if you get the camera you should try it out and report back!