Looking forward to the show, thanks a lot for organizing it! 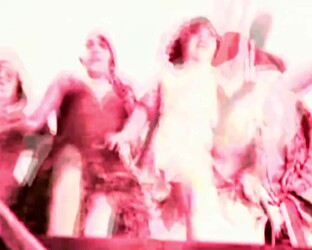 This video is a work in progress that explores a once black and white silent film with renewed colour, sound, and vibrancy. Featuring clips from Oscar Micheaux’s “Within Our Gates (1920),” video delay and feedback, this is an experimental approach to archival footage restoration, Black cinema, and video synthesis.

A drawing made by hand as a source to create several experiences with feedback loops created with Hydra. It is transformed as a trace of a hand into a trace of digital feedback. From pen to pixels. Erasing the start source and playing with it is left until it disappears.
The music was made by Rapo and Flor de Fuego with analogical synthesizers.

Created by Flor de Fuego based in La Plata. Argentina.

For this piece,“Goblin Fog,” I ran a nanoloop fm lofi fake gameboy groovebox into two of my 100 Grit modules and a 4ms DLD delay. It has chords in it but it got heavy/noisy anyway.

The visuals are a couple of security cameras, a tv, a videonics video equalizer, and a sima sfx9 mixer, all stock producing video feedback. Re-scanned with a camera.

This video is a recorded portion from A. Bill Miller’s ongoing weekly studio sessions. In the studio sessions, video feedback is mixed with live liquid manipulations. The soundtrack for each studio session is different and generally new music. Frequent collaborating musicians Wowsville and Aldrich Terrior multiple tracks for Studio Session 32. The recording comes from the second half of the performance and includes one track from each musician. Studio Session 32 was also performed with a dedication to Tyler Lavigne.

This set is dedicated to all the people who fought for their rights and for social justice in 2020. Keep up the fight!

ALEX PELLY & OREN KOLIN “Jupiter Peaks”
Jupiter Peaks is an audio-visual collaboration between Alex Pelly and Oren Kolin featuring dark ambient soundscapes accompanied by audio reactive analog visuals. The audio was recorded live with Alex on audio synthesizers and Oren on heavily affected electric guitar. Alex then created the visuals using modular video synthesis and feedback.
Alex Pelly is a Canadian video artist based in Los Angeles who frequently collaborates with musical accompaniment, recently delving into music making herself. Oren Kolin is an Isreali guitarist and singer/songwriter based in Los Angeles, that also plays in the dark ambient band Drawing Board.

JELLOTONIN & SLEEP OF EONS “You Better Fucking Redner”
Angelica Lopez and Jorge Bojorquez met in July 2015 at some Italian deli they both worked at in Tucson, AZ

After 3 months they joined forces and never looked back. They are now the A/V couple Jellotonin and Sleep of Eons. Woop woop be on the lookout for the revival of Inner Freq-Tucson’s all-ages synth meet! We have big plans. May not be a synth meet, but our goal is to get synths out to our community in one way or another! Coming back early 2021. Tune into your inner freq(uency)

SOLQUEMAL “Made By Everyone”
Used hydra framework to create feedback loops between 2 videos:

Monologue from Sans Soleil (Sunless), directed by Chris Marker in 1983. Sans Soleil - Poetry will be made by everyone is from the song cycle Sunless by Modest Mussorgsky. Sans Soleil is a meditation on the nature of human memory, showing the inability to recall the context and nuances of memory and how, as a result, the perception of personal and global histories are affected

Hope you enjoy it

NIGHTEYES/XZX “Anticrystal”
Andrei Jay and Jason Hartman met and bonded as aficionados of bizarre heavy metal in Madison, Wisconsin. Anticrystal is their first recorded and released collaborative work featuring Jason on bass and percussion and Andrei on vocals and synths. You can find this track on the amazing compilation “Mesmerized by Metal” https://mesmerizedinmadison.bandcamp.com/album/mesmerized-by-metal which might still have a couple of physical vinyl copies left for purchase. And you can also check out more of Jasons work with Vanshing Kids at https://vanishingkids.bandcamp.com, more of Andreis work as XZX at https://xzxmusic1.bandcamp.com, and the video for the Vanishing Kids song “Without A Sun” directed and created by Andrei at https://www.youtube.com/watch?v=FFlMBPGziFg

In this video, Panzarino performs Barbra Streisand’s version of “Memory”, the signature show tune from the musical “Cats.” Panzarino’s voice is processed by “The Nipulator 2.0”, a custom-built, wireless electronic bra created by the artist that uses hardware potentiometers (or knobs), a hacked DJ Hero microcontroller, and a Max/MSP software patch. The left “nipple” of the bra manipulates the frequency of her voice in real-time, while the right “nipple” adds reverb. In the background, we see VHS footage shot by Panzarino from the World Trade Center observation deck in October 2000. In Memory, Panzarino (who grew up in lower Manhattan) pays homage to the pre-9/11, pre-internet culture New York City of her youth.

Monica Panzarino (b. 1979, New York, NY) is a video artist and educator. Her single-channel, performance, and installation works combine real-time image/sound manipulations with a feminist, and often humorous, critique of American popular culture.

Panzarino received a Master of Fine Arts from the School of the Art Institute of Chicago in 2011, and a Bachelor of Fine Arts from the New York State College of Ceramics at Alfred University in 2002. Her work has exhibited widely both nationally and internationally at venues including Museum of Contemporary Art Chicago, Institute of Contemporary Art in Boston, MA, Cheekwood Botanical Garden & Museum of Art in Nashville, TN, European Media Art Festival in Osnabrück, Germany, WRO Media Art Biennale in Wroclaw, Poland, Winnipeg Underground Film Festival in Winnipeg, Canada, Athens International Film + Video Festival in Athens, OH, Chicago Underground Film Festival, and Art in General in New York, NY. She has been an artist-in-residence at the Experimental Television Center in Owego, NY, Signal Culture in Owego, NY, and Outpost Artists Resources in Queens, NY. Her videos are distributed by Vtape in Toronto, Canada.

KNOB FONDLER
Knobfondler is one half of the group “The Knob Fondlers” and also head of the Eurorack Modular company “Mystic Circuits”. Liveish Nubbins is an electronic reinterpretation of the story of Siddhartha focus grouped for maximum profit and while using only vegan instruments. For more check out www.mysticcircuits.com, Mystic Circuits on Instagram and Youtube, or The Knob Fondlers on Instagram.