Im young, broke, and have no knowledge on electronic... please help

I’m 17 and never payed attention in the electronics part of my science class, which I regret now. I made the karl klomps dirty video mixer, and I don’t really know where to go from here. As I have basically no knowledge in electronics, I really don’t know where to look to learn about making my own video mixers and stuff. Every single guide online pretty much assumes that you have a good amount of knowledge on specific parts and electricity overall. But im kinda stuck, I bought a crt off my friend who’s also in my grade, and I got another one on facebook marketplace for free that works pretty good. Basically just asking, where do I go now? Also how did everyone gain their knowledge on this stuff in general, im so lost?

…i got some really nice effects from a combination of Panasonic MX-mixers - i used the 10, 12 and 30 variants, which allow already for pretty advanced manipulations…

…with a little patience, persistence and most forward phantasy and creativity a limited budget should not be a serious problem…

…ah! - and in regard to hacking (video-) stuff: there are a lot of resources online, and the links here in the Wiki-sections should cover most of what is available…

Where are you located?

I learned ages ago (30+ years ago) about basic electronics from books at the library. The Internet was still a decade away.

Today, MAKE Magazine has some good physical books on basic electronics which might be a good place to start. I think they’re available for purchase as PDFs as well. Understanding what the basic components do is a good foundation to have before trying to tackle bigger things.

When I was young, my favorite haunts were thrift stores and flea markets to snap up cheap stuff to experiment with. I’ve broken/destroyed more devices that I can remember…but each one was a learning experience.

KEEP IN MIND: CRTs can be dangerous when opened. This should be reserved for only experienced technicians with the proper safety protocols. They will shock you even when unplugged. Anything that plugs directly into the wall can give you one hell of a jolt. Wall warts are a lot safer but can still be dangerous if you’re really sloppy. Battery-operated things are the best bet for practicing things like circuit bending. Start with battery-powered audio toys and cut your teeth there. Then switch to video, whose signals are a totally different beast.

I’d say start with your imagination. Are there things you envision that you would like to see done in reality? What are they?

Then write them down. How ever you keep notes. Maybe just a journal of ideas. I use a dry erase board.

Then ask on the forum or google it. It sounds like you’re good searching online. You just have to ask yourself, “What do I want to make?” Or “Do I want to study other artists before I decide that?” Or “How would I layer 3 video sources?” That’s my current question

Don’t worry about not having an education right now. Most people here are self taught, you learn as you go.

I agree with what was said earlier, a mixer would be a great start. You can learn about infinite loops and do a lot of really cool things with them.

Also, here are some inexpensive builds 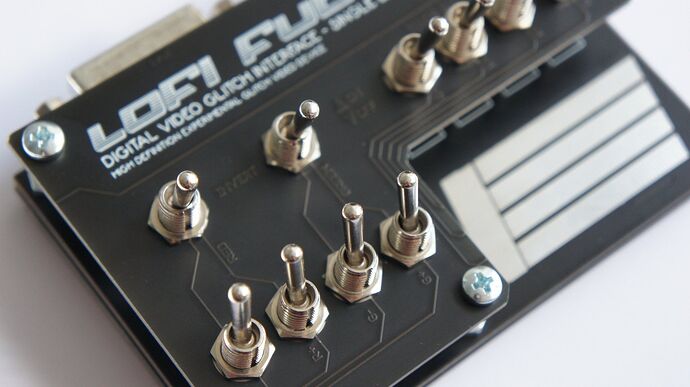 And if you want to get a little deeper into VGA circuit bending, check out Jonas Bers CHA/V Video Synth

…how to build a DIY video synthesizer on the cheap *Disclaimer: Do not read any further, and especially do not attempt any of the procedures described below. Didn’t listen, ok…

Thanks to Lofi Future and Jonas Bers for sharing this knowledge.

point a camera at a CRT and experiment with video feedback.
there is a hole you can fall into!
add a videomixer with effects to the path and you will be rewarded with many variations of the organic visuals
loop the mixer onto itself and add machine feedback to your output.
add a media player