A project I have been working on has just been released, that might be interesting to this group…It is a free, open-source, configurable video-call software to make it easier to collaborate for online performances.

Some things you can do: 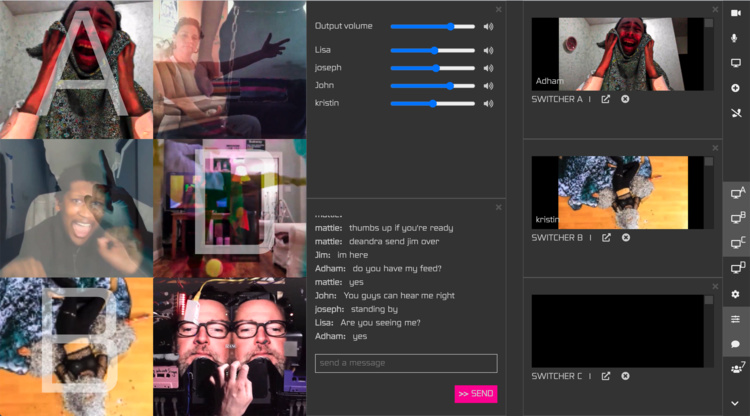 Try it at (use chrome or chromium!): https://livelab.app/

coming soon: desktop version where you can send OSC and MIDI :]

if three people were playing together one with video and one with audio and video could the third person just be doing the mixing of those signals for the final output?

is there any chance of mixing video signals instead of just switching?

it could be neat to have built in though

This looks awfully handy for multimedia collabs, much more advanced than ‘chat to your mates in Zoom’

Yeah, in an earlier version I had mixing built in, but right now the focus of this app is mainly to help with routing media, but you could use a different app to mix and then send the resulting feed back through.

this looks amazing! going to try and set up a little video_waaaves meetup/workshop zone thru this sometime maybe in the next week or so, hmu anyone who is interested!

This looks great - thankyou for building and sharing this!

Ahh! Thank you for this! I really like how straightforward the interface is, and I like that I can open multiple tabs to the same room. Much appreciated!

This looks amazing! Thank you.

coming soon: desktop version where you can send OSC and MIDI :]

I’m currently looking for a solution that includes OSC so this is very exciting. Is OSC currently working in the web version, or will that need to wait for the desktop one? And any idea on the timeline for the desktop release if so? Weeks or Months?