Hi,
I’m trying to form a simple blanking circuit using an LM1881 (configured as per the datasheet reference circuit) and some 4538s.
The composite sync output of the LM1881 is all wrong for some reason:

Admittedly I’m using a pretty shoddy video source - it’s a little HDMI-to-composite converter which outputs color bars when no HDMI is connected. I’m buffering it through an AD811AN video op amp and you can see the sync pulse is pretty badly defined - the LM1881 datasheet has some instructions for forming a simple 500KHz RC filter on the input - which seems to work pretty well:

filtered_video_signal_680k_over_510pf2545×1132 38 KB
The bottom is the same video signal with all the 3.58MHz subcarrier content heavily attenuated.

I think the issue is related to the way the LM1881 clamps the sync tips. It should buffer them out but instead they are removed from the input signal altogether, which causes it to clamp lower than it should, forcing the sync to occur when the video signal falls below what it perceives as the DC level.

This is how the buffered and filtered input signal looks like when the LM1881 is powered off:

And this is what it looks like when its on - the sync tip is almost gone:

Both helped a little with reducing noise and distortion, but the sync tips on the input are still getting chewed up pretty good.

Anyone has any experience with the LM1881 and has any ideas for what I can try next?

Can you show the circuit and schematic ? I know you said reference but I think it would be good to see the whole picture.

Have you measured where your sync level is at?

Looks like there is something going with your input buffer. You shouldn’t need to buffer the external video signal before sending it to the LM1881, it only requires a 75R termination and 100nF cap between your terminated video input and LM1881 pin 2. LZX Cadet III is a good example lzxdocs/Cadet III Video Input Schematics.pdf at master · lzxindustries/lzxdocs · GitHub
You can try to connect your buffer to the terminated video input as shown on the schematic and see if LM1881 outputs a valid sync in this case.
Hope that helps.

Thanks to both of you!
This is the schematic, I’ll upload pictures of my breadboard setup later in any case.

@BastienL hmm I guess it makes sense that I would need to terminate the video signal, but if the source impedance was the problem wouldn’t the buffer resolve it anyway?
I’ll try it soon!

Just now realized I wasn’t terminating the buffer input either

Adding the terminating resistor cleaned up the input a bit, but the issue remains, the signal becomes super muddy at the LM1881 input whenever its powered on. With or without the chroma filter

It’s always good to have your input terminated with a 75R resistor, as it will help with reflection/distorsion of the signal. Generally, the transmitting device will output a 2Vpp signal with a 75R in serie with the output, and the receiving device will have a 75R termination resistor, which will bring back the signal to 1Vpp nominal level (as both 75R will make a voltage divider, that divide by 2). So if the goal is to extract sync first and then send the video to another device, you’ll need a gain of 2 as shown on the Cadet III or one of the application circuit of AD811 datasheet 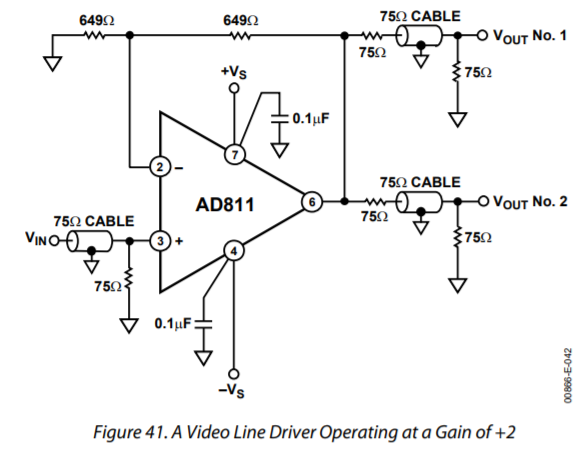 Then, if the signal will be processed by the circuit before going to another device, you can keep it to 1V during the processing, and do the gain of 2 at the final stage/output of your circuit.

Then, LM1881 works with a signal ranging from 0.5V to 2V, which means if the signal is unterminated (2V) or terminated two times for any reason (0.5V), it should still be able to extract sync correctly, the 100nF AC couples the signal and an offset is added inside the chip (this way, the signal goes into a “known range”, as some device will output the signal DC restored, other AC coupled) so I guess the threshold voltage of the comparator that extract the composite sync is set to work in any case.

I got it to work finally - and it seems to me that the issue is my video source - it’s only 250mVp-p.
When I set my opamp gain to +3 it went to 750mVp-p, which I thought would’ve been enough, but the the chroma filter brought it down to 600-ish mV and that seems just shy of enough for the LM1881.

When I increase the gain a bit more everything starts working fine (more or less):

Guess I need to get another test pattern source! Or variable resistance to my gain circuit
Thanks for all the help! Adding terminating at the opamp input cleaned up the signal too

Good to hear it works better, the csync output seems to start at the beginning of external signal sync which is good, though it still extend further during backporch/burst, so it would probably ask for a bit more gain (or you can keep it as is as a “free horizontal blanking”

That’s weird that the output of your converter is that low though, is there any settings on the converter to act on contrast of the output? As I know some converters/test pattern generator contrast setting will change the amplitude of the b&w signal + sync, so a too low contrast can result in a too low amplitude of the sync, and then the receiving device cannot sync well to it. I’m using a Philips 5518-TX pattern generator I got for cheap, it’s old and pretty big/heavy, but been useful to have something that output a signal that is in-spec, though the contrast/video amplitude does act on the sync level as well as the b&w content of the video, so it gave me trouble a few times, searching for an issue on my circuit while it was the setting on the test pattern generator.

it’s really just one of these cheapy adapters: 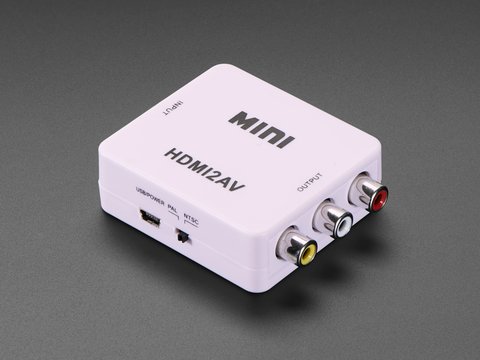 HDMI to RCA Audio and NTSC or PAL Video Adapter

Do you have a display, television, projector or some other older device that isn't compatible with your HDMI devices? Here's an adapter that will allow you to convert HDMI from ...

No need for a dedicated test pattern generator, anything that can provide a video signal is useful

Yes you could look into Automatic Gain Control 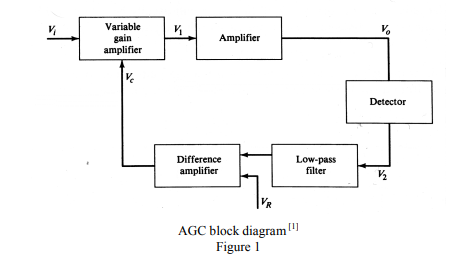 https://citeseerx.ist.psu.edu/viewdoc/download?doi=10.1.1.387.7137&rep=rep1&type=pdf
that would allows to keep the right amplitude regardless of the input amplitude, then this may be an issue as you wouldn’t have control on contrast anymore, as the signal will be scaled to full amplitude all the time.