Hello World, I am a beginner to video synthesis, and I am trying to learn about it. I create videos in my spare time, so I decided to pick up a video synthesizer by Statikstramentz. I am sending my video from my computer to HDMI2AV, then running the RCA cable into my video synthesizer, and then routing it back to the CRT TV. It shows the video and other stuff perfectly fine.

My problem now is that I’m not sure how to incorporate a capture card that would send the video from the CRT back into my computer to record. I was looking at the Elgato HD60s, but I still don’t know how I would implement that into my gear. I’m not even quite sure if the Elgato HD60s would even work with what I am trying to do. If someone could help me out with what capture cards to use (other than the blackmagic becuz im not rich like dat) I would appreciate it quite a lot. I’m trying to get 1080p or 4k. As I stated, I just don’t know how to incorporate the capture card into my gear, where would i plug these things in, and stuff like that. visuals would also help me A LOT lol

it sounds like you are trying to record a composite output from your gear…
are you going to want to monitor on the CRT as well as record at the same time?

you’d need a composite distribution amplifier for that

it sounds like you are looking at the elgato h60s…
it only accepts HDMI inputs so you would need a scaler if you intend on capture in 1080 or 4k.

Remember scalers aren’t magic even if you DID spend a lot of money going from SD > 4K is going to be pretty rough. Even if you did offline scaling via something like topaz labs.

a capture card simply takes video information via HDMI, composite, component, SDI etc… and sends it to the computer over USB or thunderbolt there isn’t too much to understand however you need to make sure your capture card can accept the resolution/frame rate you are sending it to capture. If you aren’t willing to read manuals and check specs you are going to have a hard time.

lots of questions you’ll need to answer before anyone other than yourself can help much more.

this allow live monitor, SSD recording, and a HQ stream into the computer all at once.

This is also only about half of the capture rig. I’ve got 2 VHS decks (one for recording, one for SVHS recording), an AV>USB SD card recorder, and a HDMI > USB. This means at any time I could be recording in up to 6 different ways. There are reasons to use all of them and reasons to not use them it becomes a choice rather than the only option at a certain point. 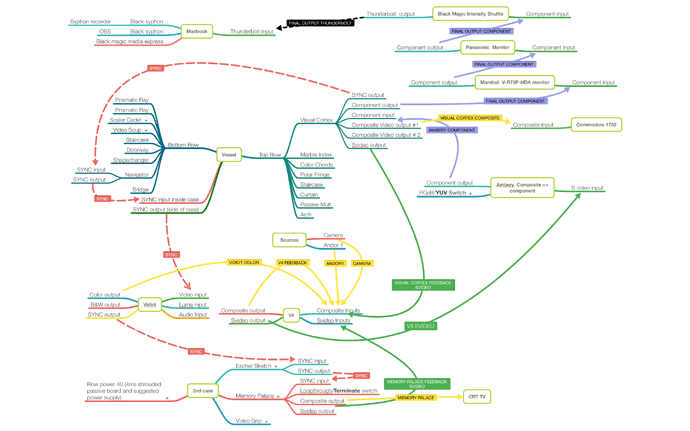 Setting up a system

so I’ve just moved my system around and thought it would be nice to write up some general ideas on it as I get it set back up as it may be helpful to someone System overviewold setup the setup at its simplest is a mixer running into the visual...

here is plenty more reading I put together about the subject of putting together a system. There is a TON of information here in particular.It also probably reuses some of the links above

I appreciate your help quite a lot, and I apologize for not stating a budget on capture cards. My budget would be a maximum of 150, but from what I understand, 4K would be too difficult? I honestly just want everything to be quite hassle-free, which I know it probably won’t be. I’ve read through some of those links, but there is way too much information for me to digest. My plans for what I am doing is to begin my edit in After Effects, export it, and usually what I do is have my CRT act as a second monitor, so I literally open the file and drag the player over. I hope I’ve provided enough further information, I am very new to this stuff, and I’ve been researching it heavy, just some aspects and concerns that I don’t quite have the knowledge on yet lol.

Edit: I know it’s possible to cut the CRT out of the picture and not use it whatsoever. That is something I consider to some extent. My video synthesizer is solely just for helping improve my effects when I do make edits and stuff of that nature.

a good and easy way to record what you are seeing on your crt is to point a camera at it. this could be a phone camera, or a web camera or a dslr - this depends what you what to do with it.

ie if its for editing clips in a video later, then recording on your phone and sending the files to pc for editing after could be easiest… but if you want to live stream what you are seeing then a camera that sends its live feed to your computer over usb or something might be better (i think it might be possible for android phones to act as live video input over usb ? )

to HDMI2AV, then running the RCA cable into my video synthesizer

one thing to remember with this setup is since you are using composite video, this is standard definition resolution . pointing an HD camera at the tv is one way to upscale it - has the advantage of capturing aesthetic glitches of (what i assume is a circuit bent device) you are using to process the video…

another way to capture composite video on a budget is using these v common and cheap easyCAP capture cards. the quality is not as high as blackmagic gear - but i personally find them useful for a lot of the (lofi) art that i make - you can always enlarge the size of your video in video editing software or even live in obs - quality is always lost in these processes but if its glitchy anyway maybe it is enough ?

As others have said, the most effective way to retain the character of the glitches you get and upscale them is to re-scan the CRT using a video camera.

I personally use a Sony Z-E10 to capture the CRT screen, then load that into my computer for editing. Capture cards have a particular ‘look’ to them that flattens things out a lot more.

Ahh I see, I read both of the replies from you and cyberboy. from how it sounds, its just not worth going the capture card route. im just struggling to find a camera to adjust shutter speed, iphones suck with it all the apps just suck imo. im gonna have to find a good one on my phone or order a camera soon. but yea ive started doing the rescanning the screen instead. also merry christmas to you all, i really appreciate the help and you guys talked me out of spending 100 bucks on a elgato LOL.

Ya video capture can get wild if you really dig into it.

But if you want to keep things simple for now and not worry too much about 1080p or 4k… If you just want get some video into your computer it’s fairly simple.

You already have a HDMI2AV converter… Have you considered buying the opposite? AV2HDMI?

Plug that into a USB port on your computer, et voila!

I use OBS to record video/stream and it recognizes the USB/HDMI video input, no drivers needed to install. These parts are cheep, so your looking at a less than $30 setup.

An RCA splitter can also help split the signal up so it goes to your computer and to the CRT. The cheap ones might dim the image, but I usually get a good signal.

Hope this helps and that you have a lot of fun as you explore video synthesis!!

maybe even with a nikon a10 pointed at the monitor for a tele cinema, what do you say?

ouuuuu i like the looks of that… it would be much easier for me because Iphones are in MOV files and I always have to convert them into MP4. I’ve tried downloading Apple’s Quicktime but it simply doesn’t work, i’ve watched tons of tutorials on the fix for it but none have worked for me. so its a pain converting MOV files into MP4.

the splitter looks slightly confusing though, i have never seen something like that ever in my life haha, im still pretty young so that may be a key part in that. but, from my understanding you would plug the power USB into your pc, the hdmi, and then i would run the RCA cables into my video synth, and then into my CRT and it would capture all of it? My apologies if I am misunderstanding something, this stuff is tricky to me.

edit: after reading over it again, i believe you are saying just the video synth would be captured into my computer and not the crt. please inform me though if i am wrong. but if thats the case, is there any example footage out there of how it looks or maybe the process behind it?

Hi! Sorry I posted the wrong link on my previous response. The second link was wrong but I’ve fixed it. Here it is again just incase:

You will need this capture card to send the video back into your computer.

I love diagrams! So I made one for you to make things easier to imagine. 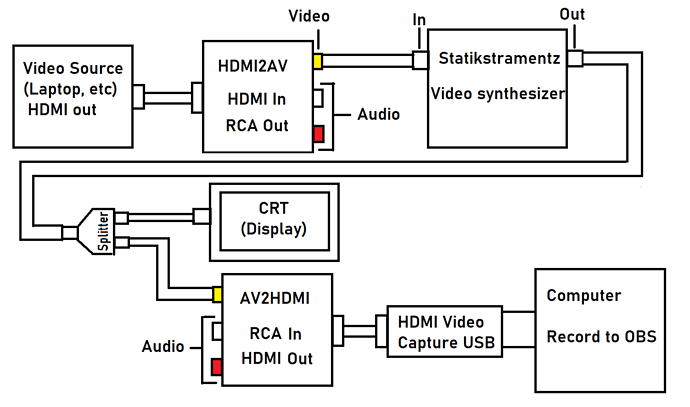 (You can plug the splitter directly into the Statikstramentz Video Synth Out, I just drew that little cable so the picture would be a square and not one long rectangle.)

Hope this helps! Let me know if you have any other questions.

Also, I personally use a laptop to send out the source video through my gear and then capture the video to a separate PC. I’m not sure if you are planning on sending your video off your laptop and then recording it back in. Not sure if you will run in to issues doing it this way but I am sure there are some video source settings you can change to make it work.