Maybe you have also been at first intrigued, then completely disappointed by the many historical attempts of mapping color to sound (or to specific aspects of music). Here are some observations about why they are bullshit little more than hypothesys. 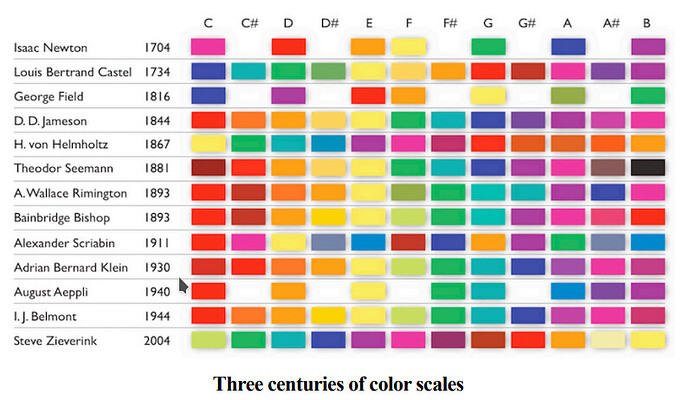 The most obvious observation to be made is that there is little consistency among the color scales proposed. Commenting on one such scale, the color theorist Patricia Sloane put it succinctly. “We should not need to be told that strong similarities rarely occur between systems created by human beings (say, music) and natural phenomena (say, color) (Sloane, p.314).”
Critical reviews have further argued about why direct mappings are unlikely to be satisfying. Jones concluded that there are significant differences between the nature of color and the nature of sound (Jones). The musical scale is divided into octaves with repeating qualities, where color has only a single spectrum. Where the ear can pick notes out of a chord, the eye is unable to distinguish various frequencies in a color-blend. And unlike the relationships among sound frequencies at various intervals, there are no such meaningful relationships between color sensations and light frequencies.
Garner added that while a note produces harmonics, a color does not and that while notes in a musical chord occur together, hues in a color chord have to be placed separately. He concluded with the observation that notes are about time, while hues are about space (Garner).

yeah i’ve written a lot on the general awkwardness of attempting to directly translate audio into video. theres quantative ways to establish the lack of any kind of ‘natural’ isomorphism from changes in audible frequencies of pressure waves over time to changes in visible frequencies of light but thats kinda pendantic and besides the point b/c the qualitative perceptions are generally more important to aesthetics than quantitative sensations.
if you just kinda abstract the concept and then ask “why don’t we have audio-odorizers (ways to transform our music into smells in real time) or a way to map our pheremone reception directly to our sense of balance” it just kind of points out how kind of absurd it is in the first place to imagine that there should be any kind of natural transformation between senses.

This was a big topic of discussion between me and the drummer in my first band when we were in high school. The main thin is that it would have to be bidirectional, so you could also record sounds in the field and store them on media as sound that would be experienced as smell during playback.

“why don’t we have audio-odorizers”

We do, it’s called your butt!

Super interesting topic by the way! I always thought Alexander Scriabin got pretty close to finding a good balance.

Isn’t Western music scale itself kind of flawed? Something about the math not being perfect.

yeah I think the way music is tracked over time correlates much more directly to the way light can be mapped over time…with timings of notes, modulations, etc you can achieve lots of communication across both domains.