hi there! i had a really solid priced roland v-8 come up locally and i’m contemplating the buy but i’m hesitant because i can’t find a good user manual and the only thing i’ve heard about edirol stuff is the TBC is really lousy.does anyone have any experience with the V8? hows the TBC? worth picking up? i share a wj-ave5 and a JVC jx-c7 with my partner currently

i have 2 V4s and a V4-EX. i like them. unless you are doing a lot of intense circuit bent stuff the tbc is pretty sufficient. seems like V8 would be good if you wanted to keep a lot of input sources plugged in permanently, otherwise it’s kind of overkill because you can still only mix two feeds? they have a lot of digital effects and a smoother key-edge than the panasonics.

yeah if you have a ave5 already then just be sure to run any super glitchy stuff through there first,

otherwise they have some more ‘arty’ style effects on the rolands. and yahh the feedback on my v4 is a nice different flavour to older mixers.

user manual for v8 you can download from roland : https://proav.roland.com/global/support/by_product/v-8/owners_manuals/

even heres the service manual if you want to mod / repair / take a peek https://github.com/Syntonie/videomanuals/tree/master/Roland%2BEdirol

v8’s built-in feedback effects (which are not on the v4) are really nice and useful (to me at least). One is sort of a straightforward additive/blooming feedback, the other is a frame buffer delay. Both are great in combination with output feedback.

I actually made a slightly over-the-top, four-part series exploring them. The final part, here, combines those with its other effects, for a reasonably full picture of the possibilities: 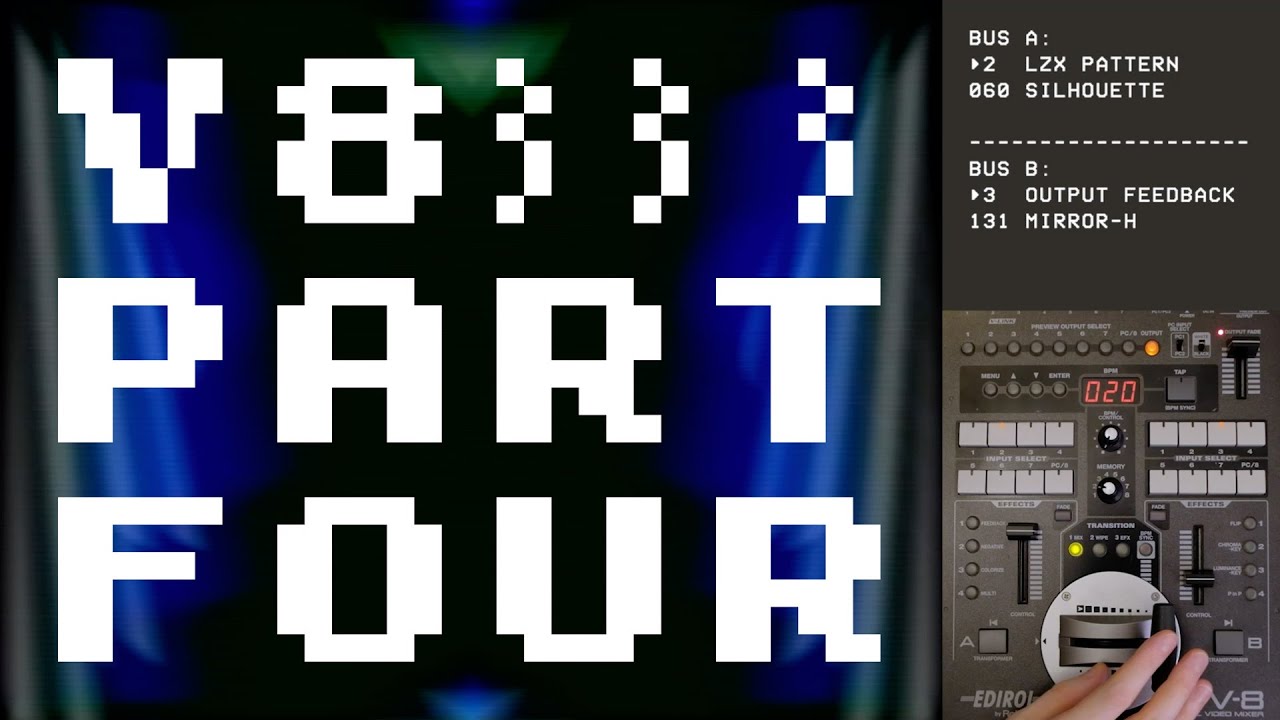 Additionally, having input loop-thru is super handy for monitoring.

I rarely have more than 4 inputs plugged into mine, but the feedback effects and loop thru makes it really a worthwhile upgrade from a v4 in my opinion (and, yeah, especially since you can find them for not much more money these days).

This is great, thank you so much! I had always wondered if the V8 had advantages over the V4.

No problem. The other main advantage I guess I didn’t mention is the VGA input. Handy for getting computer output into it vs. having to convert to NTSC/PAL RCA.

Also, @laihalll, I notice the V8 user manual is posted on the manuals wiki page (in Resources > Roland).

From an effects perspective, the V8 shake effect is so much better than the V4’s. With a bit of practise I managed to actually bounce a luma keyed logo around the screen like I was playing Pong (its a circular shake as opposed to the V4s more diagonal shake).

I appear to be buying more old SD kit these days!!!

We got a Edirol V8 a few weeks ago and we’re super happy with it. I was happy to see it’s more complex than I expected (my only other video mixer is a much simpler Panasonic WJ-AVE5). All those separate monitor outputs (and having a second mixer) allow you to get very creative with the signal routing (which for me is a huge part of the game).

The TBC is not great compared to the WJ-AVE5. Without the WJ-AVE5, using my BPMC Premium Cable and Syntonie AVE MOD v2 would have probably become frustrating. Maybe I need to tweak again the “Sync Threshold” settings.

It has on-screen menus so a dedicated monitor is helpful. Some effects are a no-no for us, but we like other ones. It’s definitely built for performance, all faders and buttons feel solid and responsive and allow for very quickly actions.

We think we found a bug - you can set custom size for your VGA inputs, but sometimes they get reset to default values. They they get back to your custom values as soon as you change the values of 2-3 pixels

With the Bug: mine does the same.

TBC: tried tweet the “sync treshold” but had no luck. Still using my ave5 for glitch units like the avemod before going into the v8. Check the sync-ope thread, this could be a solution.

How difficult do you reckon it’d be to repair a v-8? I just got one the other day and everything works except for main outputs and I have no idea how to fix that. Finding this service manual feels like a god-send right now.

I know I’m late to the game, but I’ve got a really well-worn/well-loved V8 just chilling in my house.

Needs a T-bar, one of the faders is snapped off (but replaceable), and one of the Transport buttons has popped out (I have the button!), and I’d be willing to part with it for $300 in Brooklyn, NY.

PM me if y’all are into it!

Has anyone had any luck repairing a V-8? I can get a stable output through the individual outputs on mine, but the main outputs give a scrambled image (sorta like what happens with an unsynced mixer / oscillator). I did a factory reset (no luck), and opened it up but didn’t see any bad caps or anything else obvious. It’s in good condition and I feel that it still has life in it! Any thoughts would be appreciated.

…the same P-10 input was selected on both channel A and B, the tempo was set to 120BPM, the mixer was auto-switching on the BPM between channel A - colorize on - and channel B - same signal, no effects…

…any ideas on how to solve this? - might a tbc after the V-8 help? - i have extremely good results stabilzing any bad signal running it through a Panasonic ES-10 - however this introduces a noticeable lag also…

…tried the Youtube-‚clip‘-feature (new to me) to make a clip showing the problem: