SD vs SDI - differences and questions

I was trying to research scanlines to find answer about differences between SD and SDI and could not find anything fitting.

I’m coming to you with this questions as this weekend I’ll be doing visuals in a venue and I’m worried if I’ll be able to connect to the video input.

The organizers told me that I’ll be connecting to DAC-70 (DAC-70 Up / Down / Cross Converter | Datavideo | Datavideo | Professional end-to-end solutions provider for your live video production.) which will be then connected to the displays.

My VJ setup consists of few pieces of gear like camera for feedback and VSERPI unit but bottom line is that I want to use WJ-AVE7 as master output and was wondering if it will work when I connect to DAC-70. 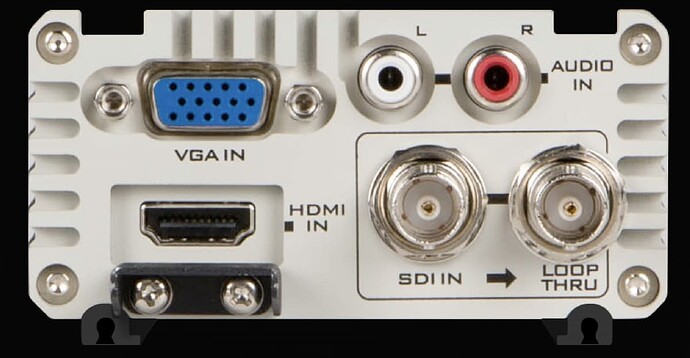 Judging by this image as well as input chart of this device:

I’d say it should work but then I’ve never had any experience before with such DAC as I usually just plugged to CVBS/S-Video input.

Can somebody knowledgable in this subject confirm if this would work? Or what would be the best way to input video signal from WJ-AVE7 to the DAC? And also what’s the difference between the SD and SDI?

I just ordered S-Video/CVBS to VGA converter in case it doesn’t work as I hope it will.

SD is a resolution (usually 480p for digital/roughly 480i for analog but video resolution terminology isn’t really that precise or standardized, especially with analog video). Composite video is always SD, unless there’s some exception I don’t know about (not counting 240p from old game consoles and computers, since 240p 60fps is kind of the same as 480i 30fps but not really and also SD analog video can also be nominally 576i ut I’ve definitely used old, consumer capture devices that work at more like 520i and yeah, analog video resolution gets a bit vague all around)

SDI is an older digital video interface protocol, kind of the AES/EBU or S/PDIF but for video instead of audio. It has been around a long time so a lot of gear with SDI capability is SD but the SDI protocol officially supports up to 2k or something now.

Short version, SD is (sort of) the resolution of the video signal, SDI is (sort of) a type of digital video connection.

Never used personally your mixer or that converter but it looks like a solid solution. Some thoughts: