Hey all, here’s the sitch

I’ve been playing with capturing images of my CRT Dell Monitor with my phone camera (Working on getting a DSLR but those are expensive). For now, I’m just using an HDMI converter to RCA to VGA setup since its a computer monitor, and I’ve managed to snag some nice shots of anime stuffs with the shutter speed/refresh rate discrepancy.

But my real goal is to eventually generate my own imagery, and use the light generated from that imagery to expose silkscreens. I plan on using my own homemade generators because I cannot afford to buy pro-circuit-bent ones at the moment. But the thing is with silkscreens is that we use photo positive films to expose our screens, not direct light. Any photography nerds here know of a way/can think of a way to make a photo positive from a screen that isn’t just taking a digital photo? Maybe do a color separation if that isn’t too much of a stretch?

In addition, I also have a few questions that I’m trying to explore, and I’d like to hear some of yall’s ideas. Sorry for the occasional artspeak, I’m in art school for another 2 years so its rooted itself into my brain.

And as a bonus, take some totally a e s t h e t i c pics I’m using to kick off my silkscreen project. 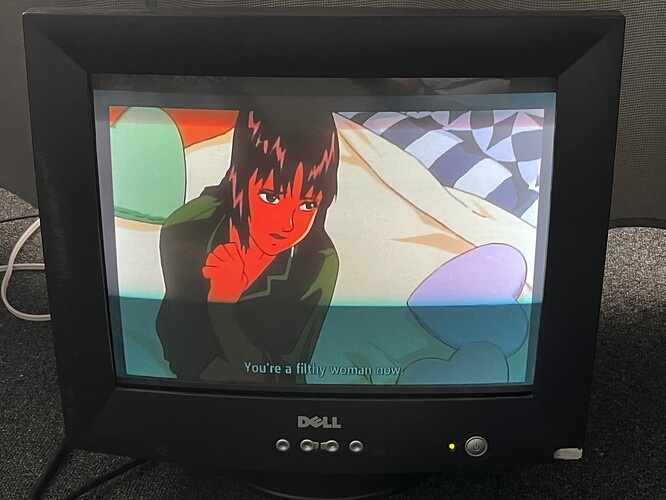 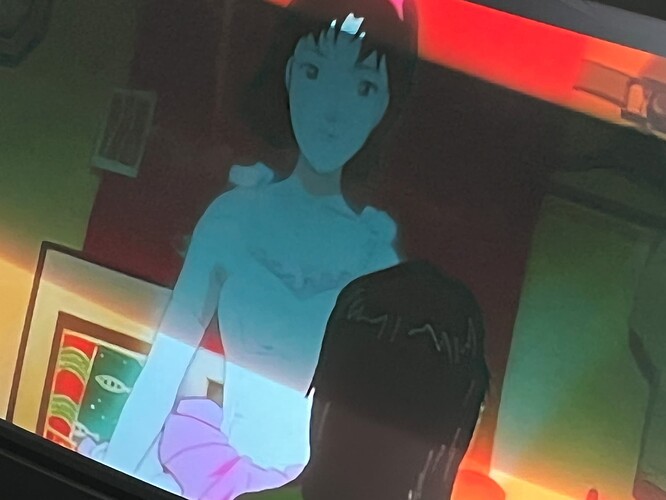 so something worth considering here: is capturing the SCREEN output important or capturing the VIDEO signal itself important? There exist a number of analog video printers that natively take analog video inputs and are able to print out screenshots (Panasonic Ag-ep60-p for example). Is would probably be fun to dig into the signal flows of these to see if theres any fun tricks involved in decoding YIQ into CMYK (at least in older models, newer ones would almost certainly just be some kind of framebuffer and DSP based) that could be relevant to your interests.
if capturing the screen is your priority, then a screen is just photons, like everything else you see, except that one needs to take interlacing and field rates into consideration when trying to photograph. I couuld very well be missing something obvious here, but i don’t think there would be anything remarkably different about the various processes one would use to take a picture of like a horse and then making screens from the photograph?

Definitely the video signal is important to me when I get to generated graphics - I want these prints to be a way to capture unique generated graphics that may not get recreated any other way. Thanks for the recommendation on analog video printers, thats a great suggestion and I’ll definitely look into them.

You’re right about the screen just being photons, but I suppose what my brain was thinking was something along the lines of “how many times are these photons being captured and re-displayed?” But you’re totally right, I can just take a photograph and make my life a tad simpler. Capturing the photons via direct exposure to some kind of photo-sensitive film or just taking a photo would still both be capturing them. Thanks for the thoughts !

1a. Having greater control over shutter speed, aperture, lens, etc. may help, but also may not produce much better results than learning to control the capture device one already has. Indeed, capturing at higher resolution can create adtl. problems with moiré especially. Which is all to say: if you have a phone app that allows you to control shutter speed, you quite possibly can capture decent images with just a phone, with some practice/experimentation. That being said, the extremely wide angle of most phone lenses can be a hindrance, depending on what you are trying to achieve.

1b. Personally, I think one should consider the capture device as part of the signal chain (rather than a neutral observer of a monitor – or whatever image one’s eye sees). You’re already planning to further translate the image into screenprinting, so I would encourage experimentation with capturing as well. “Honor thy error as hidden intention.”

2a. CMYK color separations are the most obvious perhaps

2b. Building a series of monochrome images into separations (similar to how Phil Baljeu created RGB oscillographic images by capturing 3 passes of b&w Rutt Etra images). But the separations could be mapped to any color you want – not replicating the colors seen on the CRT but creating something new.

2c. One can create custom separations from a full color image by isolating certain dominant colors in Photoshop (or similar graphics programs). Especially since the RGB color gamut of a CRT is so much wider than CYMK, this may help produce more vivid results.

These are great resources, thanks so much! Especially for reminding me that I am not tied down to certain colors, I think I’ll get much more fruitful results by experimenting with color and not trying to copy the screen point for point.

And to add onto the experimentation with capturing, I’m now thinking of not even counting these prints as a “finish line” for this project. While it might be a good milestone, it’d also be interesting to see how I can reincorporate these stills into further work.

The capture device also being part of the signal chain is also illuminating, thank you for bringing it up. I guess I just feel always a little silly using my phone camera, but use what you’ve got I suppose!

Again, thanks for the thoughts, they’re super helpful!!!