One of the key pieces of equipment in my video glitch chain for the past few months has been the trusty Playstation 3 that was previously just collecting dust in a corner of the house for years. I think a huge underrated feature of the PS3 that I don’t see discussed very often is the fact that it seems like one of the most readily accessible ways to get internet video content (YouTube, Hulu/Netflix, Plex, etc.) output to an analog signal without the need for any dongles/adapters, most notably S-Video and component with the appropriate (very affordable) cables. The S-video AV cable that I purchased also includes the standard yellow composite, which allows me to send the image into another input/mixer without using a splitter.

What has been most useful to me is that the YouTube app on PS3 has surprisingly been maintained quite well with modern times, and facilitates connectivity to my phone’s YT app essentially like a Chromecast. So from my phone I can search/browse and prepare a queue of videos or pull up a pre-made playlist on youtube set to autoplay/shuffle and the PS3 image looks fantastic going thru the AVE-5 or V4 via S-Video. Music vids, nature docs, stupid cat videos, Any% OOB speedruns, you name it. Also, being able to use the wireless controller is a convenient bonus to quickly switch apps, adjust settings, or scrub/skip through videos if the phone isn’t closeby. Full disclosure, I pay for YouTube Premium, which is probably necessary with the frequency of ads YT’s been pushing on people these days. Getting this type of utility from it definitely makes the subscription easier to justify though.

Obviously, the PS3 is also natively capable of playing CDs, DVDs, video files from UPnP network or USB drive, and an enormous amount of game titles as well. It is very easy and highly recommended to install custom firmware to jailbreak the system. This opens the doors wide open to playing not only backups of PS1, PS2 (if it’s a fat PS3 model), and PS3 games via USB drive, hard disk, or local network, but also the emulation of soooo many retro consoles with Retroarch. Custom firmware also allows one to install more flexible media programs like Movian that allow for finer adjustments to video resolution/output settings.

I am aware that most of this can be done via a capable laptop and a downscaler to your video mixer or whatever, but this setup has proven to be quite nice and hassle-free for my particular needs. Plus, there’s already enough happening on my (and likely your own) laptop screen at any given time that cluttering up with more windows isn’t very desirable. The PS3 is just a tight, all-in-one package that unites internet, disc-based, and USB media content happily with native analog (and HD) video output. It’s very capable and versatile in ways that have sadly become rather uncommon or niche features in devices today.

Anyone else use PS3s or other devices from its era in similar/novel ways?
Recommendations for PS3-or-earlier games that you enjoy running through dirty signals? Anything that might do this type of thing better than a PS3??

hey @zawa welcome onboard, and thanks for sharing your experience with the PS3.

I personally have little experience with consoles but the above way you describe your PS3 in your setup makes totally sense to me.

I’m happy to see this thread on here and it seems that I’m not the only one that stumbled upon this gem of video gear. What’s great about it is that is hybrid between analog and HD video giving you so much options to work with.

Recently I bought the original PS3 Classic that is able to run PS1 and PS2 games but it’s model from 2007 working really slow and without Wi-Fi connection. Fortunately, there are people out there who are willing to pay for this so I will be selling it and getting instead the PS3 Super Slim with jailbreak as you mentioned as this seems so cool.

@kalikst yeah, there is a real tradeoff to consider when it comes to using original Fat PS3s. I used to have one from 2008 to ~2013. The biggest advantage of them being the capability to run PS2 games at their highest native resolution and faster load times compared to original hardware. However, these units are highly prone to the so-called ‘yellow light of death,’ which is what killed mine. Essentially it is an issue with the consoles overheating due to poorly designed thermal components. So reliability/lifespan is a total gamble, especially because repair jobs often don’t guarantee the issue will be permanently fixed (ask me how I know). But you are correct that they are still highly desirable models among gamers, so you could catch a pretty penny selling one and maybe slap a hard drive full of ISOs into a regular PS2+Free McBoot if PS2 games are your thing. Or just get a Slim/Super Slim and pull up PS2 longplays on youtube while you mix lol.

@pixelflowers Aesthetically speaking, I prefer the regular slim models purely for the disc loader rather than the SS’s sliding tray, but functionally they should be the same in terms of features and performance. For that price, total steal imo.

Do you know if the PS3s simultaneously output on both the AV and HDMI ports? If so that would be killer.

Unfortunately not. You can only select one output and you need to turn off PS3 in order to change it.

@zawa - never heard of Free McBoot before, it was really useful to learn about it! I will try to get one for my PS2 Slim and see what I can get. Honestly though I’d totally prefer PS3 ever since you made me aware of RetroArch possibility on it as I’m more into obscure games than platform itself.

any experience with connecting (proprietary or compatible) video cameras to them?

@pixelflowers I have not personally tried using one, but the sony did manufacture a proprietary camera/webcam for the console called the Playstation Eye. A small number of games used them and there was a creator app for it on the PSN store called Eye Create, which facilitated recording and some rudimentary camera effects along with a video editor. Not sure how useful it’d be in a mixing/glitching situation, but a quick glance online reveals that used Eye cameras can be had for dirt cheap, so might be worth picking one up just to see? Also, the PS2 and PSP had their own proprietary cameras as well, which might serve a certain curiosity for early 00’s webcam aesthetics if one found a way to use them creatively.

@kalikst @amfas The PS3 doesn’t need to be shut off to configure the video output settings, just scroll to the display settings on the left of the XMB and it can be configured quickly from there.

I was thinking about using my PS3 to transfer to some stuff to VHS recently, actually! I think it might do a better job than the cheapo HDMI->composite adapter I use. I used to use my PS3 with a DLNA server, and it could take raw MPEG2 from a MythTV setup I had. I think there’s also a way it can take that blu-ray on file system thing (blanking on the name). Edit: AVCHD?

I also wanna +1 the PS2 for experimentation. With Free McBoot, there’s a tool that lets you force assorted graphics modes. There’s a media player called SMS that also lets you do that. It doesn’t do much more than MPEG2 and XviD files, but PS2s are cheap. The PS2 can do either YPbPr or RGB over a component cable as well, and there was an official VGA cable for the Linux expansion. So in theory you can get composite, SVHS, Component, and VGA all out of the thing with different cables

uh i have a fat ps2 with freemcboot what’s that about forcing graphics modes? I’ve been experimenting with RTC Vanguard to corrupt roms but it’d be so much better/stable on hardware

I used a PS3 to convert digital video to composite before trying converters and such, but it’s only good for longform video, kept cutting to the menu while using shorter clips. Truly remarkable lil machine!

The standalone program for changing graphics modes on PS2 is called GS Mode Selector. You should be able to run it from the loader, and then go back to the menu and run other things with that mode forced. The SMS media player has it’s own graphics mode switching built in, and the latest versions of Open PS2 Loader also should integrate that now too!

Nice one … Ive been pointing a webcam at an iPad screen - but this way seems way less hassle-prone! I would add that if you just want to do youtube and yr own content without the disc-gaming option Sony also made media network player units that give similar result with way less form factor! 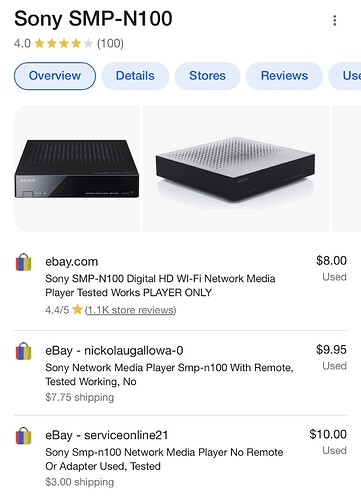 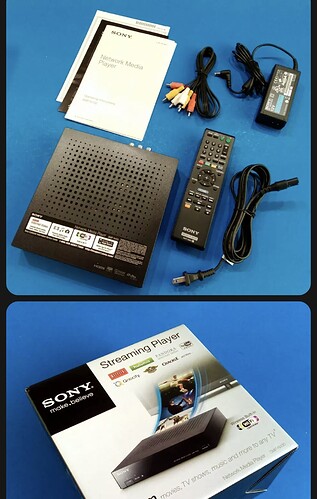 Not directly related to the PS3 itself, but talk of the Playstation Eye(Toy) cameras has had me thinking about some potential fun applications that could be worth picking up a cheap one off ebay. I’m still working on getting the components together for building a VSERPI unit of my own, but if anyone with the means could test if either of the playstation cameras are compatible via USB with something like Waaave_Pool or Spectral_Mesh on a RPi, I would appreciate the info a whole lot!

Picked one of these up for $10 and I’m sad to report that functionality on this is not very good. Network services for nearly all the supported streaming apps (Youtube, Netflix, Hulu, Prime, etc.) have been discontinued, so those are automatically a no-go. While it did manage to detect my local NAS media server over UPnP, apparently there is no support for playback of .MKV and FLAC files… so basically all of my downloaded media. Bummer!

Should be noted that I don’t believe PS3s have native support for these file types either, but can be easily fixed there with jailbreaking/loading custom firmware media apps. And most big-name streaming apps on PS3 still work fine on the latest native firmware. Bit of a shame really, the RCA/component ports on the back of the SMP-N100 would be really handy these days if it were still viable as a streamer. Love the small sleek form factor, but best use case for it that I could rely on these days would only be as a straightforward box for playing videos off of USB drive (as long as they’re all MP4). Definitely would have potential if there was a custom firmware available for it (let me know if anyone knows of one), but in 2022 these things seem to be pretty nerfed.