Hi guys just found the aforementioned camcorder, but i have no cable to connect it. It’s the 14 pins one. Looked around for adapters etc. Not easy to find anything. What solutions do I have? Seems messy to do it completely DIY. I live in Italy too where it’s not so easy to find at least the female 14 pin plug to start with. Thanks.

I found a Trinicon years ago, too, and I don’t have it handy right now to check the model number but this is the PSU/composite output if that helps: 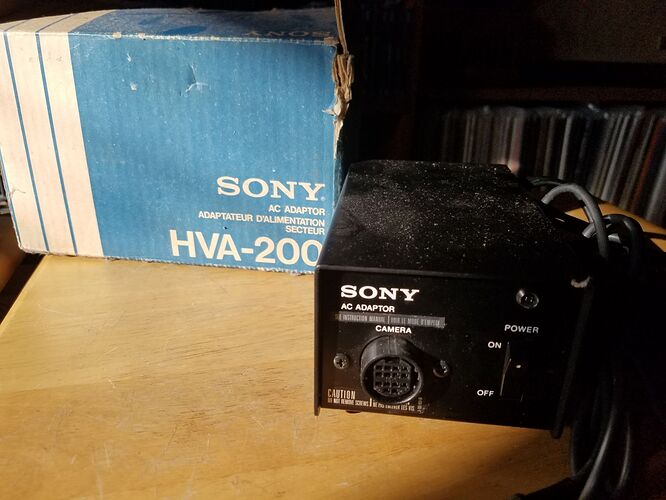 If you can get yours working without too much expense it could be worth it, I really like mine for CRT feedback but I haven’t been doing CRT feedback lately. Maybe later models were CCD but the one I have and at least some of the others are tube so they respond a lot differently than CCD cameras. There’s a tendency for high contrast motion to leave trails and it gives the feedback a sort of fluid quality that I don’t get from CCD cameras. Not a huge difference, but it’s there. I don’t have any clips handy unfortunately.

Thanks a lot. I found in france some connector that seems to convert from 14 to 10 pins and that attaches to a VCR. But I don’t know if that connects to the power. I need it for feedback so I don’t need just the VCR. But it seems like you plug it to the VCR and then that powers it up. Is it possible? Thanks for the info. I dont’ know about those cameras.

Just confirmed my Trinicon is also the 2200 so that HVA200 will absolutely work with yours. EDIT: one thing I didn’t take into account is that I have no idea if the A/V out on the HVA200 has anything in it that would be region-specific. I assume it’s just passing the signals from the camera but there’s a that if your camera is SECAM it won’t work with an HVA200 from an NTSC or PAL market. I’d pretty confident that it wouldn’t be a problem but I don’t actually know, I don’t have any manuals or anything.

That one doesn’t ship internationally but it’s a good indicator of what they cost here, I’m sure if it comes to that you could find someone on here willing to help you get one shipped if you can’t find a seller that will ship directly. I’d offer myself but between the pandemic and not having a car it’s a big hassle for me to ship anything right now.

Here’s another one that costs quite a bit more but ships worldwide and still isn’t too bad:

I guess another option would be to scour the Internet for other Trinicons being sold with the HVA-200 included and see if you can get a good deal - if you could get a second camera with EU power supply for only a little more than getting an overseas power supply that might be the best way to go - you could still only use one camera at a time, but you’d have a backup.

I’ve definitely seen Sony portable VCRs that have a connector for hooking up a Trinicon. The big connector carries power and audio/video on one cable, either from a standalone thing like I have or a compatible VCR. The VCRs I’ve seen were a little bigger than an original XBox, weighted about 10 pounds, and had a shoulder strap so you could plug in your Trinicon, power it from the VCR’s battery, and have a portable camera rig.

Popped mine open and I couldn’t see many of the components or anything without taking it apart more than I want to, but from the regulator and the markings on the solder side of the PCB it looks like there’s a transformer bringing the mains voltage down to 18v (that’s an educated guess because the part number ends in -18, the LM7812 datasheet says it takes a 19v input to get 12v out, and there’s a calibration trimmer on the board that’s marked 12v. Just judging from how simple the whole board is I’d be really surprised if the audio or video signals have anything going on except a simple pass-through from the multiconnector input to the separate outputs, and I’m pretty confident it would work regardless of the video standard the camera used.

Also there’s really not much that could go wrong in it. A couple capacitors and diodes, a dozen or so resistors, a regulator, and a little SIP thing of some kind that I’m betting is a rectifier, but I couldn’t see it well enough to read any markings.

DISCLAIMER: I’m a complete hack at electronics and just get a lot of mileage out of being good at building stuff, so it almost always works without me having to actually understand it much. But my gut tells me it’s really just a nice, 120vAC-12VDC linear power supply with pass-through for the other stuff.

Hey thanks so much for going inside the camcorder

I also thought it’s simple. The only problem I have is to make a cable that is not a total mess… I found a guy that has this https://www.ebay.com/itm/SONY-CMA-1010A-Camera-Adaptor-/184499007587 which I think is what I connect to the cable. Now I’ll probably buy one of these https://www.canford.co.uk/Products/44-725_HIROSE-RM15TJD-10S71-CONNECTOR-10-pin-female-cable-thread to connect it on the other side. I think I can figure out the scheme of the pin connections not to fry the camcorder. I’ll post some results for future users…

That’s the inside of the power supply not the camera, I wouldn’t recommend trying to make your own power supply for it or using an aftermarket power supply!

My point was that you can most likely get away with buying a power supply from a PAL or NTSC region and use it with a SECAM camera as long as you step down your mains voltage appropriately.

The cable carries more than just power and A/V, there are also remote control signals for functions (I think iris and zoom at least), and there’s just generally enough to go wrong that it’s not worth the risk and effort to save a little bit of money relative to buying a power supply. I’m all for DIY but powe supplies aren’t the best area to experiment (assuming you haven’t done this sort of thing before, if you have then that’s a different situation).

I know I wouldn’t want to try to reverse engineer that connector without any kind of schematic or factory PSU for reference or anything.

Ok thanks a lot I got myself a converter so now I have the 10 pins I’ll try to find a proper adapter. It was cheap in Europe I found it for 15 euros. I’m quite happy. Before plugging I’ll ask you for advice.