I worked on this idea for a bit but feel as though I am hitting a wall.

The idea is to split an audio signal the way a mixer does… you can have a high, mid and a low and most mixers let you raise the volume of each.

Is there a piece of tech out in the world that takes the input of an audio signal and splits the low, mid and high frequencies out to 3 different output signals?

The reason is that creating visuals through an audio responsive piece of hardware from one signal blends all three frequencies together, so when the hardware processes the audio signal into visuals they can come not a little muddy.

I’m not really sure what I’m looking for and my attempts at searching for this piece of tech has been fruitless. Any advice you have, I appreciate.

Is there a piece of tech out in the world that takes the input of an audio signal and splits the low, mid and high frequencies out to 3 different output signals?

…yes - several - one i recently added to my setup is the LZX Sensory Translator module: 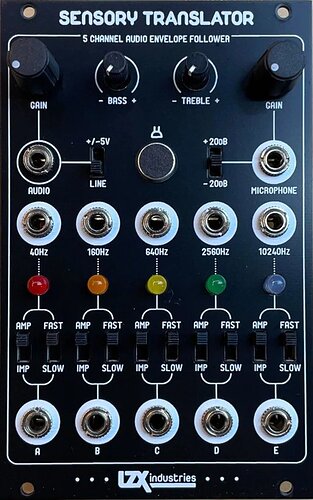 or search for a crossover. this type of hardware is mostly used for splitting audio to 3 or 4 different bands so that you can route it to separate amplifiers

Thank you @fairplay The Sensory Translator is what I am looking for… I’ve avoided LZX gear because I know once I buy my first one my paychecks are going to disappear after that.

Thank you @reverselandfill a “crossover” is the search term I was missing! I had looked into car stereo splitters a few months ago but was having trouble finding the right one. I think I am headed in the right direction now.

As far as I know, Sensory Translator or other envelope followers split the audio signal according to frequencies ranges, but they also convert the result in control voltage - that’s good for driving modules, but maybe not for further sound-to-visual processing as planned by @January, as the signal is not sound anymore.

If you already have access to an audio mixer with 3-bands EQ and enough separate outputs, and some appropriate adapters (or a second smaller mixer), try using that. Strong EQ is not the same as crossover / splitters but it may be effective enough?

If your original signal is stereo (as in 2 cables), you can save 1 aux output.
Same if you can split one of those cables, possibly with a cheap passive adapter.
If you can do both things, you already have 3 separate copies of the original signal and you just need to separately EQ them, so a small mixer with 3 inputs, Left/Right outputs and 1 aux output would be enough. Such a mixer can be bought for 50 bucks.

Sensory Translator or other envelope followers split the audio signal according to frequencies ranges, but they also convert the result in control voltage

Really this is all I am looking for something very simple that breaks up the signal and each signal output has its own volume volume control.

…any equalizer should be able to do that…

Look at this cutie!

And with volume control for each frequency! I’m so happy!!