this coming tuesday we are hosting our fourth edition of streamlines, with live a/v by @TubularCorporation and Trent Hawkins ! 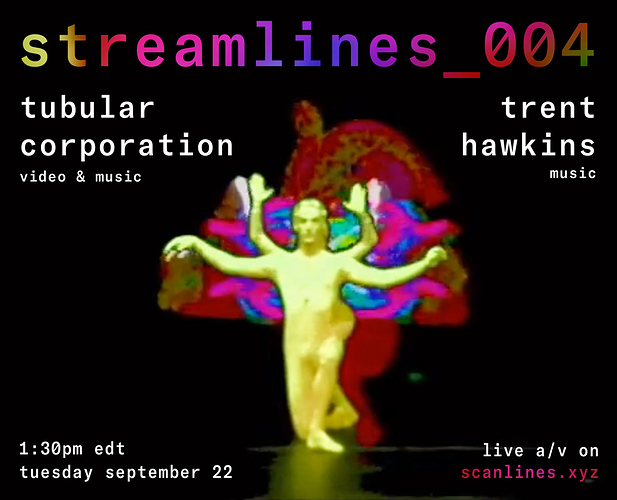 Good stuff y’all. I couldn’t join the chat (kept on getting an error about the email address already being registered when I tried to join? I dunno) but had it going as background vibes while I worked.

What was the workflow? I liked the way the lumakey edges looked, what was being used for that?

ohh. sorry @BleuNuitVideo -> this is because you changed your username. lemme fix that for u now - can you try joining the chat again ?

Yup, I can join now, thanks!

i used my magic powers to override your powers. (just changed Robs username manually for him. now i know it will need to be changed on the chat as well, if i do the same thing again for anyone else)

yes just setting the names to match on the chat worked. also just checked if they have account on videos.scanlines, but not so many people have accounts therr

Hey, I didn’t see the a new post notification for this thread, sorry! Glad you enjoyed it, sorry for the encode problems, I didn’t realize that was happening until I watched the local recording, and still haven’t figured out what caused it.

The luma keying was a Sony FXE-100, I really like the look of it too.

The setup right now is the FXE-100, two Raspberry Pis and a 3trinsrgb+1c. I’ve got a Midibox SEQ v4 controlling r_e_c_u_r running on one Pi, routed to input 2 on the FXE. The other Pi is running Auto_Waaave (with one of those cheap, ~$12 USB capture dongles for input) and is patched to input 1 on the FXE. The 3trins is patched to the aux input. The FXE has two PGM outs (with composite and s-video available at the same time, so in practice it’s actually 4 PGM video outs but only two audio outs), but it also has a monitor out that’s composite-only. the monitor out can mirror the PGM out or any of the inputs, and there are dedicated keys to select what’s routed to it. That’s running to auto_waaave so I can send any of the inputs through it, or feed back the main output through it. PGM1 has the composite out patched to the video in on the 3trins for more feedback options and the s-video out goes to my capture card. The composite out on PGM2 goes to a 7" LCD TV for monitoring.

On the MBSeq I have two CC tracks that I can use to send single CC values to control the playback location of the current clip in r_e_c_u_r, one drum track with the drum layers assigned MIDI notes that will cue and launch any of the 9 clips in the current bank, and one channel that I don’t use for sequencing at all, but have an LFO running that can also modulate the current playback location so I can cycle between a few locations quickly, and then play the center point, amplitude, shape, phase and resolution live to vary what location values get sent.

Auto_waaave is jsut used normally, but most often I feed the output from Recur to bus B and also feed it through ato_waaave and assign the output of that to bus A, so I can key the unprocessed video on top of the processed version. Less often, I’ll rout the 3trins to auto-waaave or feed back the PGM signal into it (that works well if I’m using something like multi, strobe or zoom on the bus that auto_waaave is assigned to, so that the feedback doesn’t pile up too much; also I usually switch feedback in the auto_waave itself off when I do that, and jsut use it for delay, scaling, mirroring, etc but not feedback).

That’s basically it. The medium term plan is to add a third pi running spectral_mesh (will have everything but the second Nanokontrol tomorrow but won’t be able to get that for a few weeks since I had a gap of 2 weeks between when I lost a bunch of hours at my day job and when the money from the new side job I picked up starts to come in), build a Synthonie FFG analog colorizer (PCBs on the way but I won’t be able to afford parts for another month at least), and one of the revesrelandfill triple comparators (almost done, need transistors, pots, ICs and one resistor value that I was out of but I’m waiting until I have the money for the FFG parts so I can do one order for everything), and then mount all of that stuff in a box with a 2mm banana breakout for the 3trins and triple comparator patch points, an old Tascam normalled RCA patchbay someone gave me last year so I can easily repatch composite signals on the fly, and one of those cheap 1x6 video distribution amps (I have one but I might buy a second one and pull the PCB out to make it smaller, since they’re still easy to find for like $8 new), and maybe one of those little 3.5" LCDs for insert monitoring at different spots in the patchbay.

And then the last thing (actually probably sooner than that because it’s cheaper than building the colorizer) wil be to get one of those 5" portable CRT TV sets from the 90s that are still easy to find in good shape, have composite input instead of just RF, and aren’t too expensive, and mount it in a black box with a cheap camera mount so I can put a little digital camcorder in there and have plug-and-play HD digitizing from a CRT, Scanimate style. I think I should be able to get all of that done by January and the whole project, including the stuff I already have, is still probably going to cost a bit less than an LZX Vidiot if I’m careful about minimizing shipping costs.

EDIT: that’s also assuming I make the panel for the case I stick everything in out of scrap material I already have, but I might go all out and get something laser cut if I can afford it.

Also I have a spare PCB for a small Eurorack power supply and I haven’t decided yet if I want to build that and make adapters to power everything from it (+5v and +12v should cover everything but I do’t know if it can handle three RPis on top of everything else), just power the analog stuff from it and leave space for a couple utility modules down the road, or not bother and run everything from wall warts and a USB charging bank for the Pis (probably will start with that last one because I already have all the stuff).