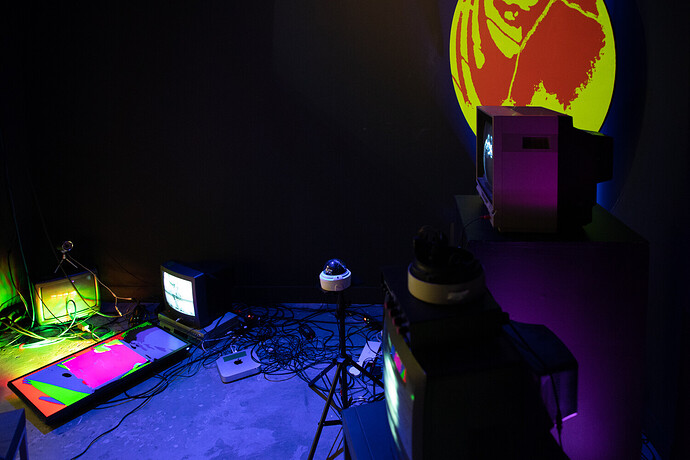 @Smeech and I have an installation going on at the TOPO gallery in Montreal until December 18th that we thought we’d share with the board. It’s called Unstable Intermediated Forms, a melding of old work to create new work. At four different stations we combined two projects each, wherein one affects the colours, shape, and forms of the other, and vice versa. 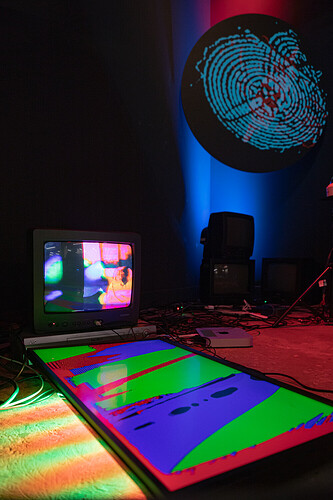 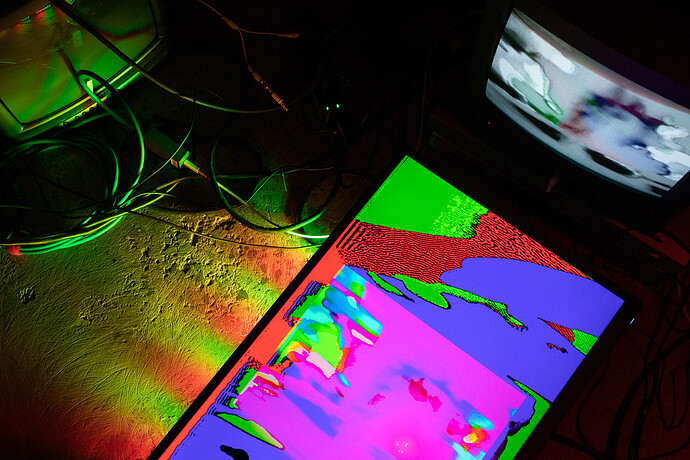 This station has Sam’s Chroma Culture piece on the wide monitor and an excerpt from my film Cable Box on the CRT. A camera positioned from the ceiling is creating a feedback loop on the floor monitor, the colours and parameters enhanced and controlled through the software Isadora. Every few minutes, the colours from the CRT feed are sucked out and the image is projected into the floor monitor (conceptually, anyway), creating a more dynamic and complex feedback loop with the video stream of the figure skater. 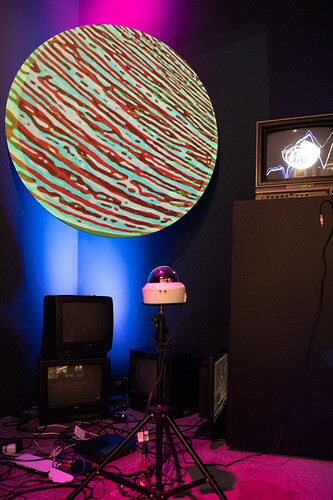 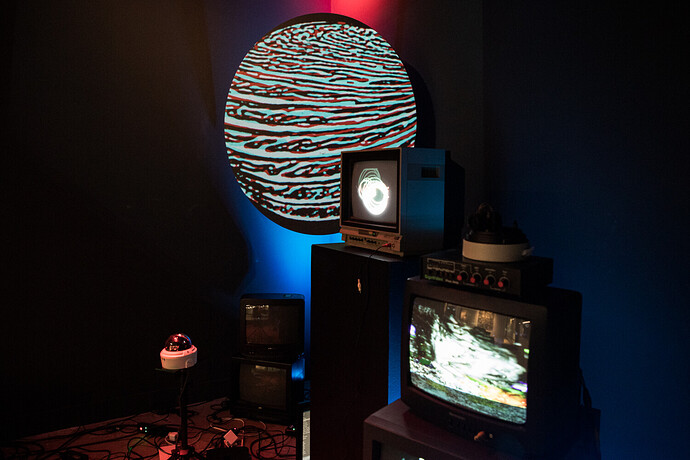 The giant circle and the Commodore CRT are made from Sam’s Portals installation and my oscilloscope experiments. My oscilloscope work (based on an ongoing project about the Puerto Rican electricity grid) forces its way into Sam’s portal feedback loop, affecting the shape and form of the image, and his Portal feedback loop does the same on my screen. 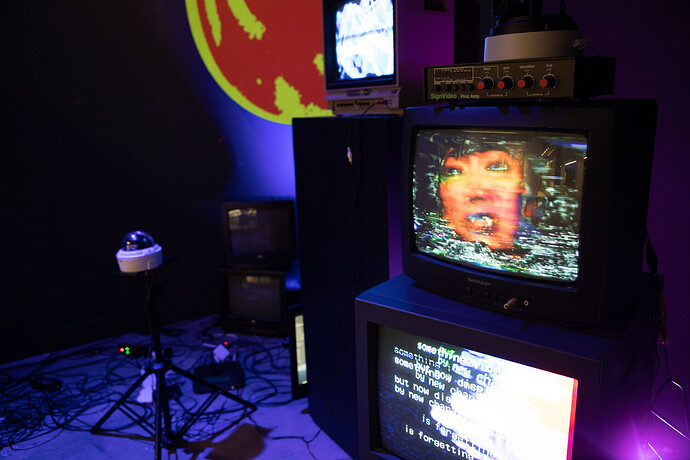 These two screens on the right highlight our love to improvise. On the top is a one-take video of mine using a Japanese variety show VHS and dirty mixers / Edirol V4 feedback. Below is stream-of-consciousness poetry Sam made using an analog titler based on the video above. Both streams have feedback loops which are cross-connected to each other. One minute the videos play separately, and the next minute they’re blended together with luminance key, the feedback loops set with different alpha channels on each screen to maximize the dynamics. 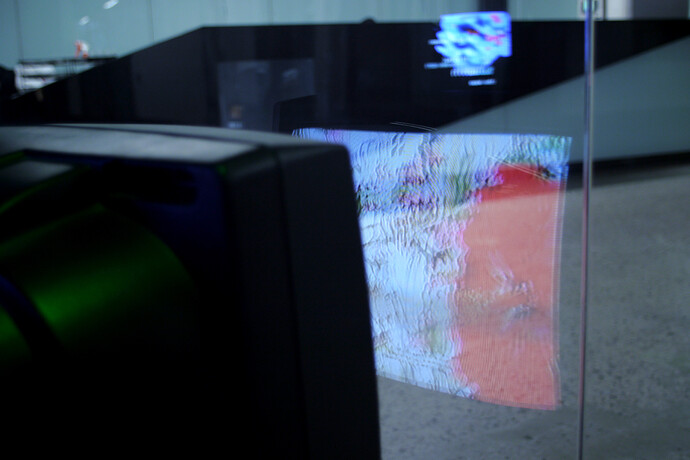 Pressed up against the window is what I consider to be our goofball section: one screen playing two different videos, the first being my Video Art for Conditional Malaise piece (blooming flowers set to the music of Billy Gomberg), the other an entry in Sam’s annual meditation on the film Groundhog Day. The Video Art stream is intended to be a meditative tool, specifically an aid through seasonal depression, but the TV is hooked up to a webcam that changes the image once you approach the screen. The flowers fade to an image-manipulated clip of Groundhog Day wherein Phil scowls at the camera and tells you it’s going to be cold for the rest of your life. 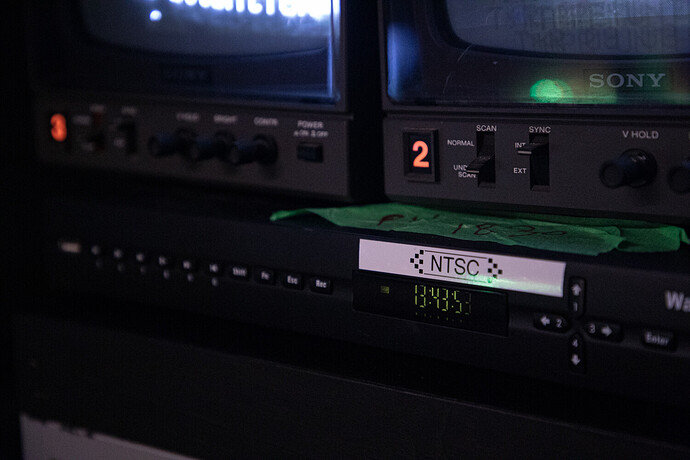 Finally, on the far-right of the room we set up a couple of monitors and a CCTV capture station. Using a couple of the live feedback cameras and a couple of extra broken ones we setup a livestream so we can monitor just some of the activity from home. This ecosystem we built breaks in a different way every other day. We have remote access for the Mac Minis, but some stuff like, say, a TV doesn’t turn on with the timer in the morning, or the composite-to-HDMI converter for whatever reason needs to be unplugged and plugged back in, needs to be done manually. A lot of back and forth. I feel like Howard Hughes obsessively watching the stream. Most of these photos (the nice ones) were taken by Gaelle at TOPO.

One of the CRTs looks to be off/broken (grey) at the moment… the one with the out-of-focus camera and the label “CAM 1”.

That’s actually facing the window, so sometimes you’ll see some blurry figures passing by or looking in.

Also I forgot to mention - looks like a great installation! Great work <3

I see it everyday because I work in that building. Looks great!

thankyou! It’s coming down this week - but I’m glad you got to see it so frequently