Using a mechanical macropad as a controller for r_e_c_u_r

so, i have been using the r_e_c_u_r raspberry pi video sampler (created by our very own @cyberboy666) in live performances and in the studio for years, but due to a streak of bad luck with numpads, i’ve been using it with an amusingly large computer keyboard turned sideways. it was cumbersome, but worked reliably!

but then recently i’ve ended up getting into tinkering with mechanical keyboards, specifically ones running QMK firmware, which is open source and lets you program the keyboards however you like.

after i fell into the rabbit hole of programming my own keyboards for use at the computer, i realized that i could create a controller for the r_e_c_u_r with a much smaller footprint using a macropad – a programmable array of keys that people usually use to set key shortcuts for editing programs or gaming. i ended up doing so successfully and here is a photo of the result (i’ll include more technical details below):

for comparison, here’s the keyboard i was using as a controller before: 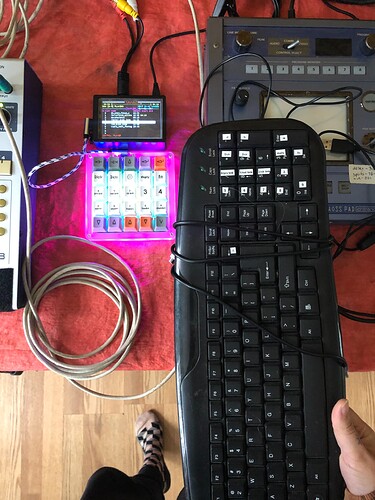 i’m super pleased with the smaller footprint (and the pretty rainbows don’t hurt either!)

ok, on to a little more detail on what i did. first off, i already had QMK compiled locally on my computer. this took some time to install but i followed the docs relatively painlessly: QMK Firmware (it’s also an option to just use the graphical interface to create keymaps, but you can control more things such as the LEDs by compiling from the source in the command line)

r_e_c_u_r normally works with a numpad by running a script on boot that remaps the numpad keystrokes to be read as ascii characters: A, B, C, etc. i think the issue with my numpads in the past was that the script either wasn’t working on my specific numpads for some reason, or the numpads weren’t sending keystrokes as they should have. in any case, i bypassed this with the macropad by mapping it to the alphabetical characters directly. the letter keys and their corresponding button functions are listed here, but basically all i needed to do was map the keys to the letters A through S in alphabetical order. i mapped 2 keys to “D” to preserve the layout because i didn’t have the long numpad “enter” key. and then i had an extra row of keys at the bottom so i mapped those to control the led lights!

many thanks to tim for making this device and also explaining how the keymapping works in it! look forward to much more use of it, also i need to figure out some of the new features…

very very cool ! thanks for sharing this ! 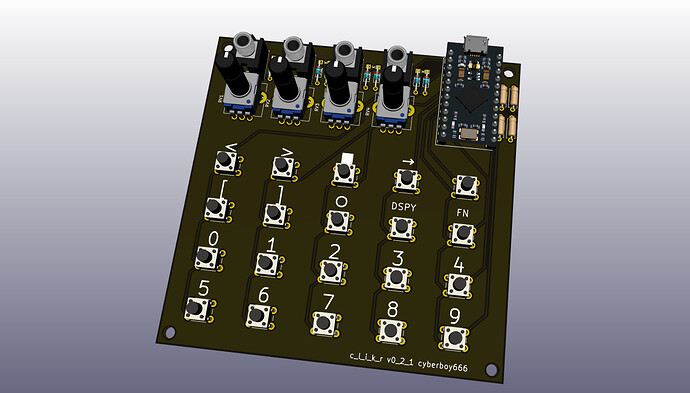 which uses a bunch of those (extremely cheap) tact switches - nowhere near as nice as your mechanical keys ! - … but also adds some cc inputs

…i would love to support you by buying from your shop - unfortunately as i gather from another thread the shop will be delayed until august or later - therefore i tried download the Gerber-files from Github, but the link there seems to be invalid; do you see a chance to get your shop up and running a bit earlier, or allow for different means (email?) to purchase items from you?..

…i’d love to get an assembled version of c_l_i_k_r, please…

hey @fairplay yeah sure email me (tim@cyberboy666.com) and we can work something out - thanks for your support