Using vintage camcorders in the now

Once upon a time, I did a residency (at Alfred) and used vintage camcorders to “rescan” my laptop screen and pipe the signal into the synth rack, through the Fairlight CVI, etc. I want to get that into my everyday setup so I’ve been looking at camcorders and realized I know nothing. But maybe you do, dear reader.

My top questions are:

Bonus question: If you know Berlin, do you have any recommendations for good places to dig through bins looking for these beauties?

Thank you a million times for checking this out and your knowledge. <3

I can’t speak for any other models, but I use one of the early 80s Sony Trinicon portable cameras sometimes (I honestly forget the specific model numebr of mine, it’s the first or second version released and they’re all still fairly easy to find fairly cheap on ebay, in the $30-$60 range with case if you look although mine came from the trash), and really like it for CRT feedback because it’s actually a tube camera rather than CCD, so it responds completely differently.

For video output, there was an external power supply/composite output box that I had to find (I think it was aroud $18 new-old-stock but this was maybe 2013 so it could be harder) but that’s it, no modification or adapters or anything needed. It’s basically like the battery chargers with a/v outputs that a lot of 80s camcorders had, except without the battery charging part.

As far as full blown camcorders the thing to watch out for is whether or not they’ll output video when the transport isn’t running, because most of them will need new belts at this point and that can be a big hassle. I don’t remember ever seeing a VHS camera have an issue, but Iv’e got a Sony Digital8 that only has video available at the composite output unless it’s recording or playing, so you can’t use it just as a video source very well (especially since the tapes run at double speed when you’re recording digital8, so you would have to be swapping tapes out every half hour or so just to get video out of the composite out). Also you can’t use it a a standalone capture device because it won’t stream video directly over firewire, you have to record to tape first.

So that’s the kind of stuff to watch out for with any old camera, definitely check the manual and make sure whatever you get will be useful even if the transport isn’t working.

If you know Berlin, do you have any recommendations for good places to dig through bins looking for these beauties?

Rather than in bins, people in Berlin leave them on the street - together with a piece of paper that says ZU VERSCHENKEN. That’s how we got a turntable, a reel-to-reel tape deck, a MIDI keyboard and 3 TVs - all working 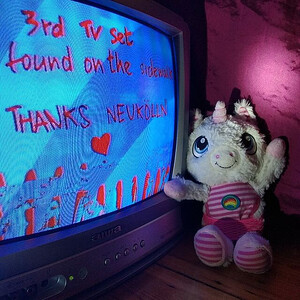 We’re also based in Berlin and sort of looking for a camcorder, but it won’t be a vintage one. Should we see any gems around we’ll let you know.