Apologies if I missed this along the way, but is there a video switcher module a la Edirol V4? Wondering if I can just pack something simple and immediate into the rack. Thanks for any ideas!

LZX stuff is way out of my price range so I don’t pay too much attention to it, but isn’t that kind of what the Visual Cortex is?

EDIT: or do you mean 19" rack mount? In that case there seems to be a lot of stuff but it’s mostly a big rack unit with no panel controls and a wired remote.

If we’re talking Eurorack for form factor and also capable of taking in several inputs with VJ-centric types of fx, I reckon that’d be LZX territory or something similarly boutique. If you’re searching for just a simple module to handle swift routing of ins and outs with a lil dirty mixer and bypass channel as a bonus, you should check out Cat Full of Ghost’s Video XCHNG module (sadly sold out on their Etsy at the moment, but definitely worth keeping an eye on).

If you’re using a standard size 19" rack and just need a simple switching hub that can handle lots of different video connector types, I think pretty good deals can be found on the type of switchers which I commonly see in many church/university A/V setups (I think Extron is one such brand that I see for relatively cheap on the used market these days).

I actually just asked again yesterday
"I had brought up a while back having a bus system module with 2-4 sets of RGB inputs and a RGB output with buttons or rotary switch to pick between the input sets.

I’d love to see something like a 2 RGB in and 2 RGB out module that was a bus system end of chain. So you would be able to knob/CV fade between which RGB set was at the program/preview (or whatever naming convention) outputs. having a built in comparator that could be switched on/off might be nice so that you could fade or hard switch like on a standard video mixer. However that could just as easily be done with your modulation source.

crossfading 2 sources to 2 destinations at the same time would be pretty great. currently in :gen3: you would have to mult two RGB sources to 2 FKGS for this to happen."

and got a response

“We’ve got a 4 in/2 out RGB Multiplexer/Switcher planned – it has a dual row of buttons like a broadcast switcher, and also direct binary select inputs (great for driving with quadrature sources or ramps, to create 2x2 patterns, etc.) This will be the core Gen3 switch/mux module. Currently it is 18HP. It’s not a focus point for us right now, but it’s within the list of module concepts that have a green light.”

i think there might be a slight miscommunication here due to the word switcher being used. a video switcher has multiple inputs and only 1 output and just some buttons that allows you to exclusively output only 1 video signal at a time. edirol v4 is a video mixer which allows you to actively mix 2 video sources into 1 video output. switchers can be pretty inexpensive and simple because they don’t need to care about encoding, decoding, or anything to do with sync signals. mixers are generally expensive and complicated b/c they have to care about encoding, decoding and fucking with sync.

theres a lot of issues with trying to fit full scale video mixer capabilities into like a single panel eurorack format, other folks can probably give a far more educated answer than me but as far as i can tell power, size, and shape all kind of add up to make it seem more trouble than is worth.

on the other hand if you have 2 seperate video decoders and 1 video encoder modules you could then potentially rig up a pretty crazy powerful modular video mixer that would be able to do some crazy stuff that most hardware mixers can’t. 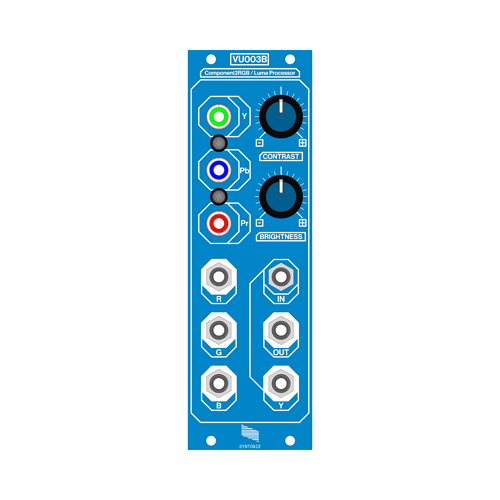 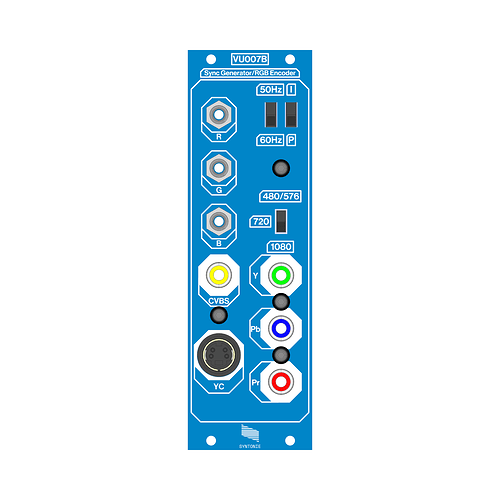 bastiens got these up now, i’m hoping to try and put together a little modular matrix mixer kind of thing based off of these over the winter. thinking 2 or 3 video inputs + enuf other stuff to be able to do per channel RGB additive, subtractive, and multiplicative mixing would be pretty sick. could try and basically jury rig something like a paik/abe crossed with a hearn video lab! tho with my soldering skills it’ll probably be more like an overpowered AC noise oscillator amplifier lol

If we’re talking eurorack modular: the short answer is no, there is nothing like a V4.

You can build a system that does pretty much all it can do (and more), but it will certainly be much bigger and many times more expensive.

I’d say the closest in terms of effects is perhaps the Erogenous Tones Structure, with the very serious difference that it is single-input only, not a mixer/switcher. And that alone costs 2 or 3x what a used V4 goes for.

To get dual-input mixing, you’d be looking at an LZX TBC2 for inputs, FKG3 for mixing, ESG3 for output, and then probably a Memory Palace or Structure, or any number of other modules for effects. You can save a lot by DIYing modules from folks like Syntonie, Fox, etc., but you will at least need a TBC2 to do dual video inputs (the Syntonie decoder does not have a TBC, so you can’t simply use two of those unless you are synchronizing externally, which can be huge pain).

LZX have been talking for a while about making more standalone devices but, knowing their typical development timelines, I would say we’re years away from that actually happening.

All these amazing answers are why this is my favorite forum! Thank you to everyone, I’m learning a lot here as I go and so this is all super helpful. To clarify, I mean euro module, but it’s interesting to consider rack mount as well. Basically portable is where I’m aiming, I’d like to ideally have a carry-on friendly euro system of hypno, structure, some small standalone, a few utilities and someway to switch between video signals. Going to explore a bit and maybe end up going with a standalone switcher for now. I’m not opposed to using a laptop if that’s a workable solution, but prefer to keep it hands-on with controls as much as possible. Thanks again for all these great ideas!

(I think Extron is one such brand that I see for relatively cheap on the used market these days ).

Analog Way also made some pretty good VGA/S-video/component switcher/scalers that tend to be on the cheap side. I was using one for converting my composite output to 720p before I captured it for livestreaming for a few years (since I was running OBS on a pretty old PC and capturing at 720p seemed to be a little less intensive than capturing at 480i and upscaling/deinterlacing in OBS) and it works great. I forget the model and don’t have it handy right now, but they only have a couple of them and the main difference is that one allows crossfades and the other doesn’t. Pretty comparable in features and price to a similar Extron, at least two years ago.

The module ‘Crossfade’ by brownshoesonly is also worth checking out!