When I convert hdmi signal into s-video or rca, run that through my videonics mx-1 to my crt, i get a weird rainbow flickering on the signal. I’m not sure how I can fix this. I’ve tried using different inputs on the mx-1, tried going between s-video and rca, and i’ve tried running the signal through a vcr which then went to the crt. I am also on NTSC so I’m pretty sure it can’t be that.

None of the things I tried solved the problem so I am at a lost for what it could be. I would really appreciate any advice!

The colour cycling suggests to me that there is an issue with chroma frequency mismatch - with the rate of the cycling as beating (like a ringmod) between the interpreted and actual chroma frequencies. Though I realise this is absolutely useless advice since it doesn’t actually help you fix it.

Best suggestion I have is to try different equipment (e.g. a TBC or other framebuffer between the converter and the MX-1) until you find something that works :-\

Okay thank you! I tried having my video signal pass through a vcr directly after conversion from hdmi to analog. Then the signal went into the mx-1 to the crt. That didn’t fix the issue but I’ll try to think of different routing ways that work with your advice!

As @VisibleSignals pointed out, it is possible that the converter output a slightly out of spec chrominance signal, which then cannot be interpreted correctly by the mixer. 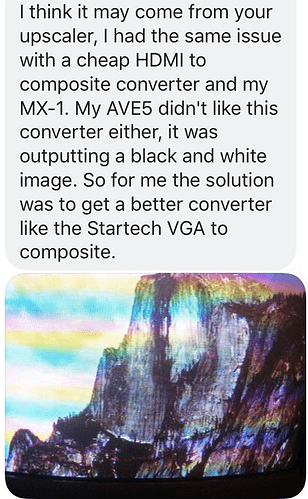 Then, as suggested, adding a digital device in between the source and the mixer might do the trick, as it will probably be able to decode the source video correctly, and then generate its own chroma subcarrier, which hopefully will be in the spec expected by the mixer.

Been looking for this meme since I started writing this post, fits perfectly 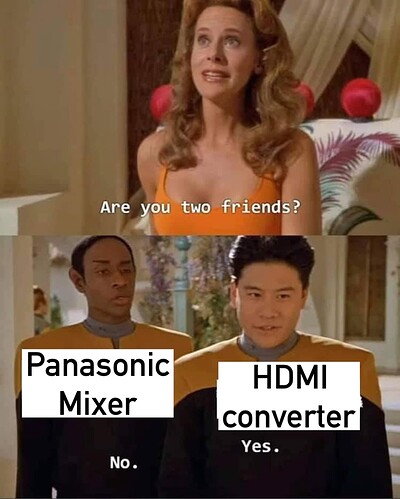 Thank you so much for the detailed response!

That definitely seems like a solution to this problem because all of my gear seems to work correctly however I do have a cheaper amazon hdmi to rca/s-video converter so that is most likely causing a not-so-high quality conversion of the signal, at least not high enough quality for the mx-1 to interpret correctly.

I’m looking at devices such as the Matrox MXO2 that can convert hdmi to analog or vice versa. Im thinking that this more professional type of conversion gear would create a correct signal for the mx-1 to interpret. Do you think that something like a Matrox MXO2 converter/upscaler/downscaler could achieve this? Since you mention the Startech VGA2VID device, it seems like the Matrox MXO2 is basically the equivalent except hdmi to analog rather than RGB to analog.

Thanks again! Yea, old mixers and new converters from amazon probably don’t go together as good as I previously thought lol

I don’t have experience with the Matrox MXO2, but being from a “known” brand (as opposed to cheaper converters), looks like it should output a signal that is in-spec.
I do have more experience with Black Magic devices though, and while doing test for a sync generator, there’s the only ones which output a proper 4.7us sync, all other cheap converters where producing shorter pulses (ranging from 3.7us to 4.3us), which isn’t much of a problem here, but it gives an idea on how some cheaper devices can “take shortcuts”, which won’t cause issue in 95% of use cases.

I meant adding a device after your converter and before the mixer, as @VisibleSignals suggested, preferably a digital device (such as another mixer, TBC, etc…).
And it is sure confusing, as even if we’re talking about analog video, devices such as mixer, timebase-corrector and of course converters, have analog I/O but involves digital processing. The input signal is converted from analog to digital, and then re-created from digital to analog at the output, that’s what your MX-1 does, though it’s not able to decode the chroma subcarrier (which carries colors). If you got another mixer or TBC that is able to decode the color properly, it will then generate it’s own signal at the output, which might have better spec than the source signal. Though it’s just shifting the issue to another device.

I need to check the MX-1 schematic again, cause some devices allows for tuning of the internal chroma subcarrier, so it is possible to adjust it so it work with your converter, though it may cause issue with other devices.
(MX-1 service manual)

Okay cool! Yea I’ve heard Black Magic devices are reliable for conversion so I can keep an eye out for that.

ahhh I see what you mean, that makes sense. Yea I feel like rather than shifting the issue to another device, it may be better to go ahead and get a better converter.

I’ll check out the service manual and experiment a little to see if I can just retune the chroma subcarrier to give a correct signal.
Thank you!

Unfortunately, the MX-1 doesn’t have anything to trim the color subcarrier (page 18 of the service manual, Y2 and associated components). It has a trimmer for the 13.5MHz crystal, though this one is most probably used for sync generation (as 13.5MHz divides nicely into PAL/NTSC sync frequencies).

But sure makes more sense to have a better signal at the input to begin with.

Will test my MX-1 with BM SDI to Analog and report.

Thank you BastienL! If I figure out something I am going to update this thread with my solution as well. I really think it’s to do with my converter.