Recently I was chatting with @ojack about our favorite ways to show our work: performance in a theatre or planetarium; white-box gallery; bar back-room; etc.

I was curious what other folks imagine as the best format for their work.

To answer my own question, while I like performing live and have done so mostly in bars, my ideal format is wall-sized, in a quiet gallery or otherwise immersive space. Something like this: 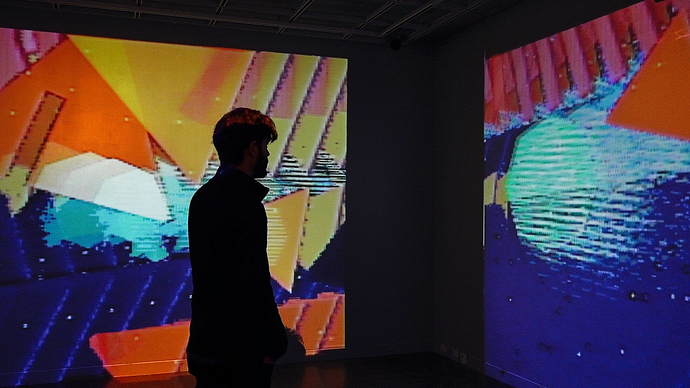 I think I really love the idea of shortish-length works standing alongside paintings and demanding the same focused attention, even though their contexts, references, and textures are so different.

for me, it depends on the piece – for performances, i like a similar space to what you described. i also show work in film fests / movie theater type spaces, and some of my work ends up in galleries. i like to look at each piece individually, and decide what serves it best based on what it is and how displaying it can fit into the concept. and of course all this weighs against what is actually available/accessible or offered to me. i also enjoy showing things online which is a whole other story.

there are a few things i prefer to avoid - for example i don’t really like doing (ambient) performances in bars with a lot of loud talking. and i usually prefer to avoid bright white lighting as it feels too harsh for me. 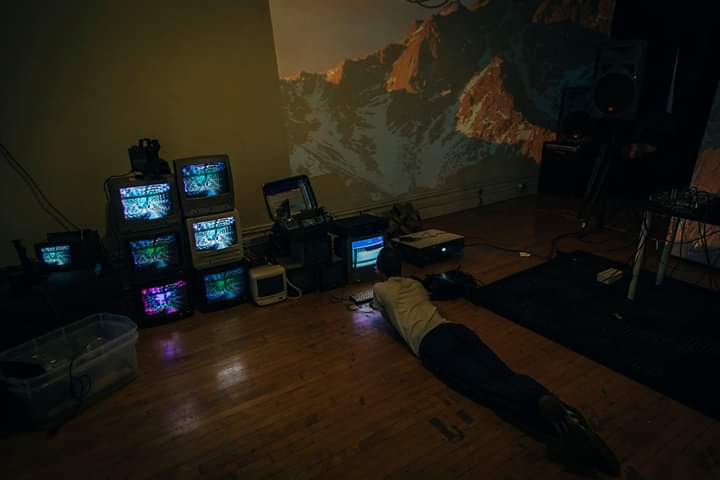 I’m kind of a home body. I don’t get out much especially lately. I run Ubuntu on a 65 inch curved 4K monitor. I sit right in front of it and it fills my whole field of view. I also run a clone of an old laptop running XP in a virtual machine. Most of what I make as art is fully cooked. That is it is not a live performance. I also have a decent home made full color laser projector that I turn on every now and then. And I have a couple of O-scopes.

although i spend a lot of time thinking about performance instruments i dont choose to perform that often myself these days. the context is a big factor (vs how stressed i think it will make me)

the most fun iv had performing was in nz when organising some mini day-festivals in a friends backyard / basement. this was super lowkey but such a nice supportive&friendly environment where we could collaborate and experiment freely 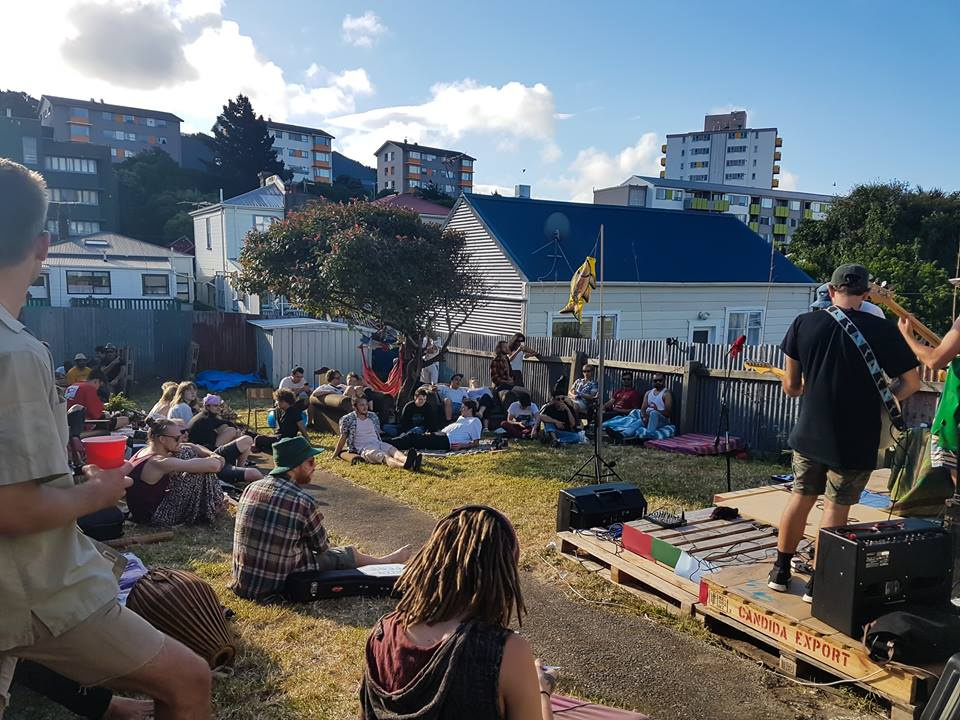 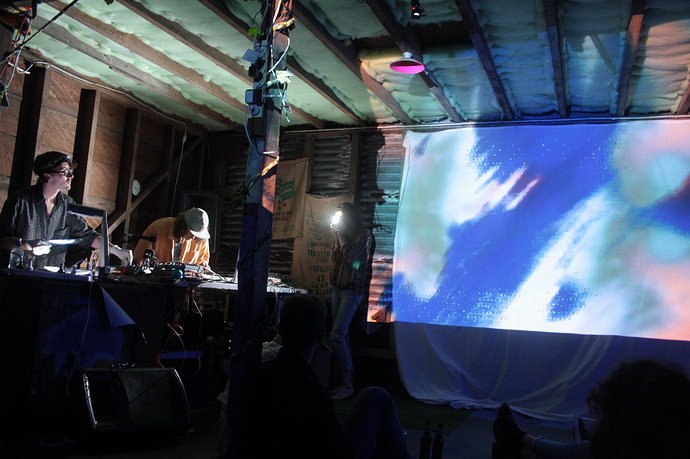 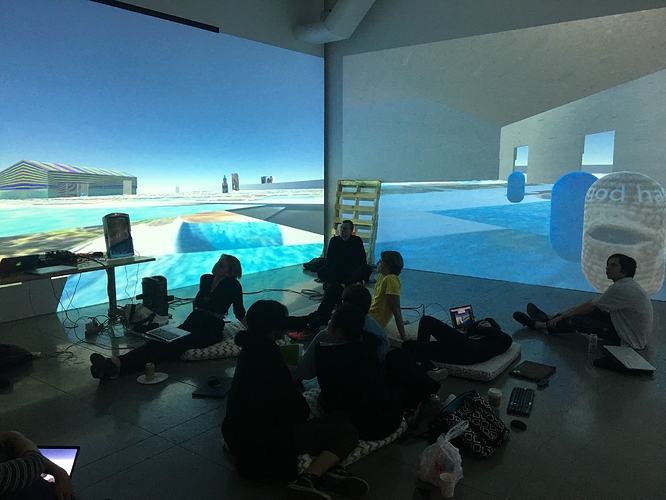 I have a project called Messlife that happens in a web browser but has been exhibited online and in galleries a few times. This is a shot from one of the gallery installations, in the New Wight Gallery at UCLA. I personally love work that both lives online / on screen but also can be in-person in a space with other bodies.

Maybe this is best as a separate thread… but I’ve been wondering lately where the best place, digitally, to put my stuff is.

I’ve started posting my explorations as city.lizard on Instagram, but I don’t love the idea of putting my things on a Big Tech Platform (with ads, privacy problems, the “like” system anxiety, scrolling temptation, etc). Especially since this is kind of a diary of sketches more than anything… it doesn’t need massive spread.

One thing that I like about IG is the ability to discover other artists and potentially get feedback on things I make. The latter hasn’t really happened yet, but it could I guess?

Does anybody have any alternatives? micro.blog? Mastodon? Deviant Art? (is that still a thing?)

Update: brain dump… maybe scanlines could become some kind of home for that? i.e. some kind of sketchbook thread where we can post WIPs and such things? Even if for some it is just a place where IG links may be posted. Lines, the music form, has a similar concept with their “latest tracks” thread.

@cfd90 these are things iv been thinking about too. from a technical perspective i have been working on something for scanlines that might solve some of this for you. will share more about this. v soon (maybe this weekend)

socially, it really does depend what you want to get out of sharing, theres no doubt that an instagram post has potential to be seen by more people than on a personal blog (for example) , but i agree it can feel a bit empty/gamified… i also hope scanlines can become such a place for sharing art

yeah instagram is kind of like about a functional balance between a terrible social media site and a reasonably decent place to share video and stills. i would enjoy using no social medias but it seems like essentially posting on instagram is like almost a necessity for my job so shrug kind of. Something like tumblr if any sort of federated alteratives to that exist would be kind of neat altho the nature of federations could make that just as obscure as any potential personal blog post. would certainly be cool to have a thread over here of just “share some links/embed some videos stuffs” tho!

We started doing live visuals at techno parties (in Berlin) and we were enjoying it. It can mean being part of something awesome.

From the point of view of the “exposure”, it implies some limitations: visuals are just a complement to the music and need to stay in the background, the audience only looks at them every once and then, the dancefloor needs to stay dark. But you can work around these limitations and/or make advantage of it. For example, relatively low attention from the audience means lower pressure, more freedom in experimenting and being able to play longer. That has been working well for us beginners.

Though, something that I’ve been pushing against my whole live career is this idea that visuals aren’t just ‘set dressing’. . . when the visuals are REALLY ON, and the music is REALLY ON, they elevate each other in a very meaningful way.

So, the audience might have not be watching critically (hopefully they’re dancing!), but they’re being effected ambiently by the visuals. . . and it’s heightening the experience (or detracting from the experience, if things are too bright/always on/not vibing).

My ideal display environment is Floor to Ceiling, Wall to Wall, behind the DJ Booth, with as much bass as possible.

Also, my ideal performing place isn’t from the house, but up on stage, where I can see what the DJ/Live PA/Performer is doing, so we can communicate. . . and so I can see how the audience is reacting, instead of behind them.

The studio I work at just finished installing a large LED Wall. We are doing tests on it now to market virtual sets. I am drooling at it and imagining throwing some visuals up on it. 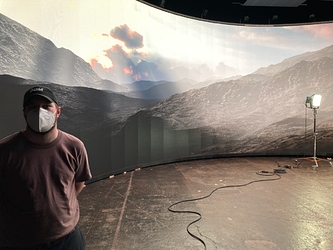 I’m partial to loose cotton hung from some part of a warehouse, improperly tightened to allow for some billowing and other types of dynamic distortion. 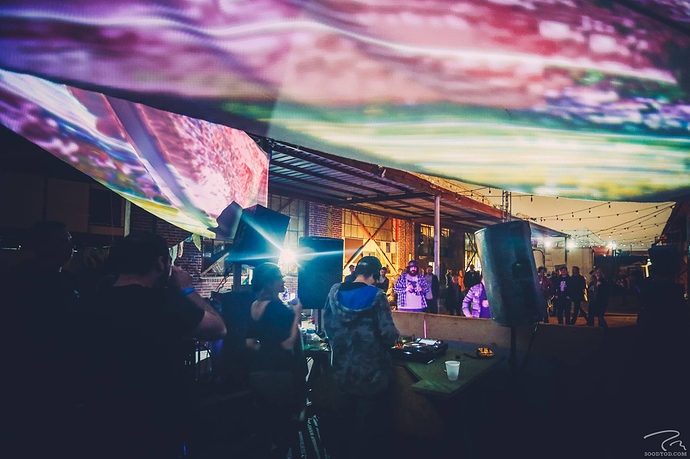 It was at first due to laziness and lack of budget, but I have come to really love the effect. I approach visuals in terms of texture and color anyways, rather than presenting a set of well considered images, so the more elements that bring their own texture and distortions to the party the better.

There’s a big budget version of this that I would love to try. A sea of mixed opacity fabrics, projectors, surfaces, screens, and reflectors. Maybe one day.

(was blocked from including a second image, here it is) 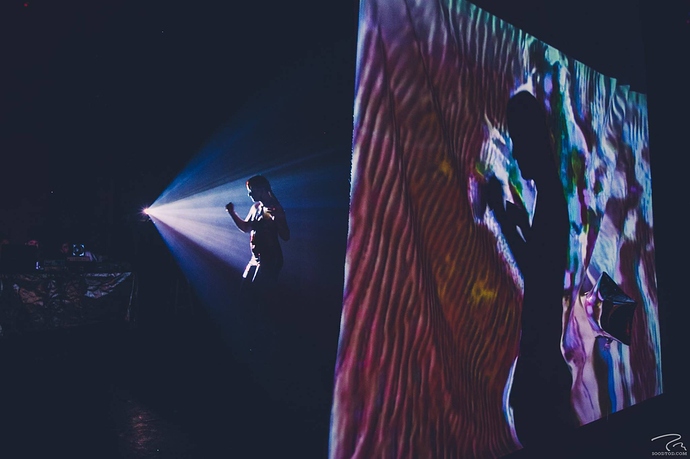 that looks really cool ! i love projections on wavy surfaces also. sorry about the posting restrictions by the way, they are built into the forum software but they should ease up over time.

Thanks! No problem at all, just felt silly double posting without explanation. I’m thrilled to have an independent forum to talk about this stuff. When FB isn’t footing the bill thinking about image hosting matters a lot.

Got in the habit of arranging CRTs like this: 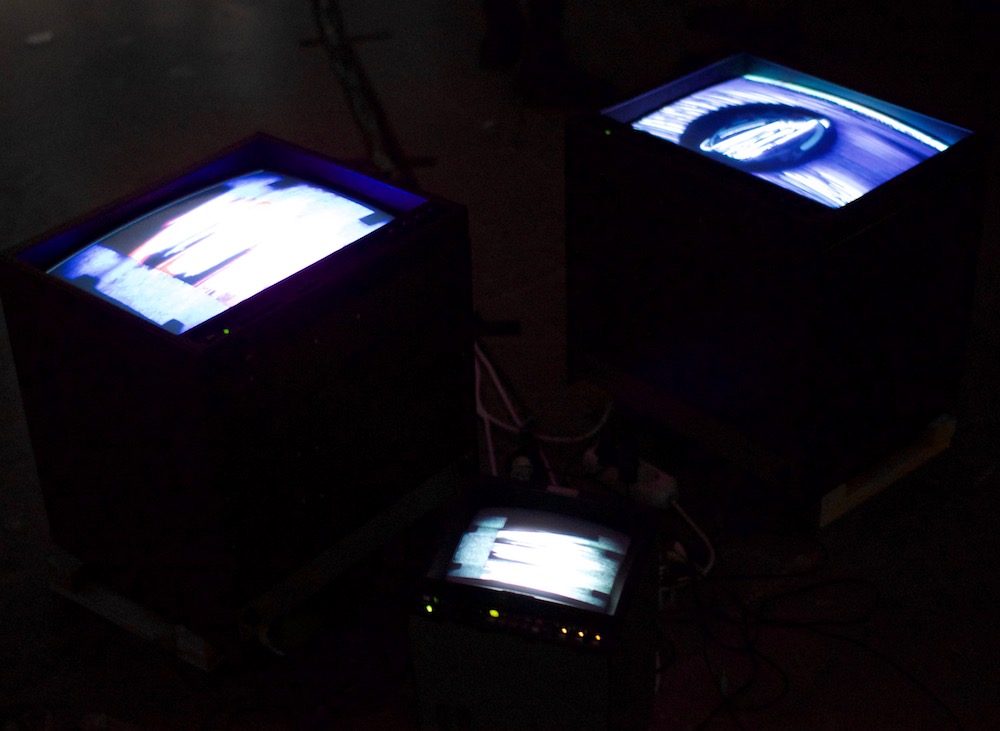 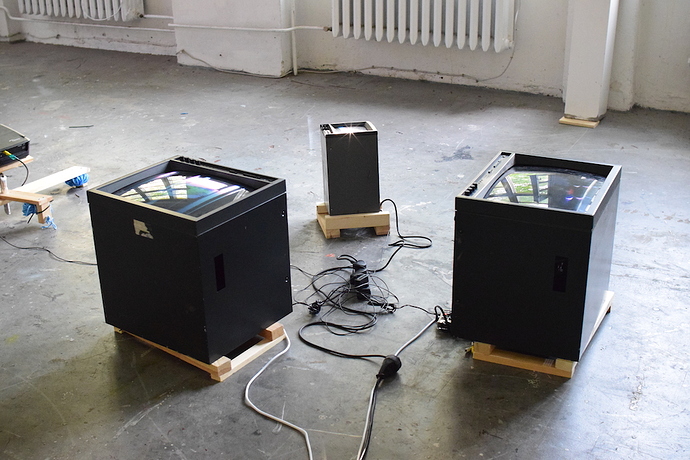 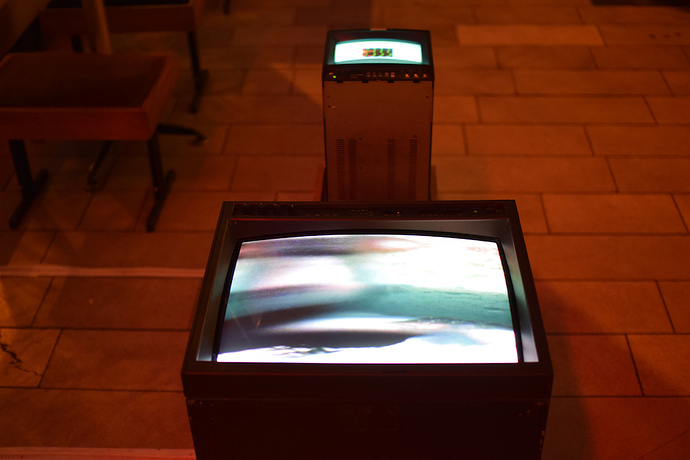 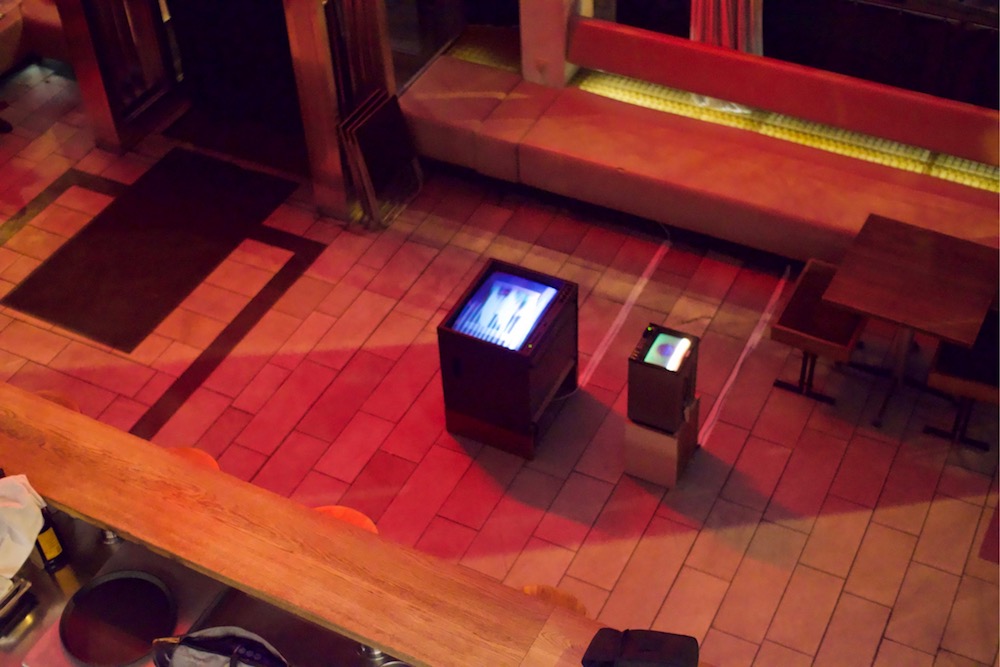 It started off mostly because finding / building structures that would hold them at typical eye-heights wasn’t possible - so a bit of wood was enough to raise the rear IO off the ground and place it.

In practice ended up really liking the format and how it could be organised. I think it makes the CRT less TV-like, and more like looking into a barrel or pool of strange substances.

Its not very healthy for the CRT though, and at least one has gotten janky / off-color via doing this.

No preference for environment though; I reckon working that bit out is half the fun (ie “site-specific”).