I posted the following to the r/VideoBending subreddit but want to put it here in case it doesn’t get a response there:

My WJ-AVE7 mixer worked correctly before, but when I turned it on after leaving it alone for two months, I get this kind of look from all my outputs: 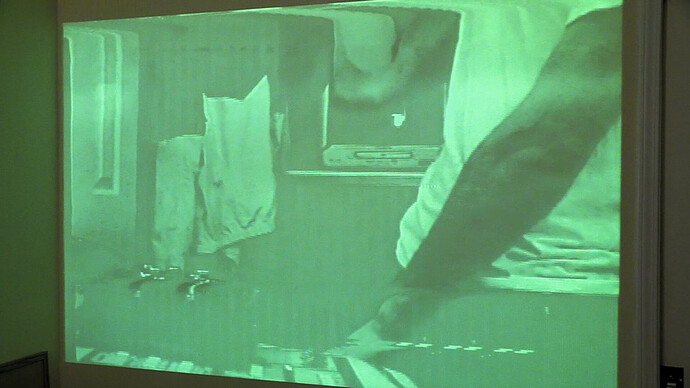 It seems like a common problem for Panasonic WJ-AVE 3/5/7 mixers and I’ve heard from both BPMC and LoFi Future, who bend mixers from that series, that they’ve also have encountered this exact problem with a few WJ-AVE mixers. I’ve also heard from one or two others artists the same thing.

However, I still haven’t been able to find anywhere how to repair this exact problem. Rumor has it that it’s some dead capacitor on the main board? That just died while it was sitting, or the last time I turned the mixer off or plugged it in? I’ve taken it apart, and visually I can’t see anything wrong with the circuit so I wouldn’t have any idea where to start. Has anybody also encountered this problem, or is more knowledgeable about repairing such a thing?

that’s kind of the default way ave3, ave5 and ave7 tend to fail from my experience. (i have multiple machines with that problem. it is usually what “untested” means if you get them from ebay…)
It seems to always happen with both inputs while everything else works fine.
I suspect it is caused by some dried up electrolytic caps.
I never really tried to fix it.

it would be super ace if somebody figures out how to fix this.

I have a schematic and service manual for the AVE5. It looksl like the video is in Luminance (Y) and Chroma © format internally with a separate DAC driving the each signal on the S-video outputs. Maybe a failure on the Chroma DAC or some problem with the Chroma signal processing.

As I recall most of the chips in these are NMOS, so if you are circuit bending it is OK to pull the digital signals to ground or to wire-mix them, but they won’t like being pulled to postive with a low impedance.

I’ve had multiple people tell me pretty confidently that the problem is a dead capacitor, so hopefully they’re right and it’s not actually problem with a chip, which would be even harder for me to solve. Need to get testing the capacitors it sound like, but I’m not sure where is the mostly likely spot.

Now that I think about it, perhaps the problem is a faulty capacitor before this chip? Helping to point out where capacitors are near this chip would be super helpful if you have the time.

I don’t have a manual for the AVE7 so can’t help you with the specifics of that one.

We do have the service manual for the AVE7! Actually @autr and Syntonie have it on their Github pages, and we link to it from our wiki. I don’t know about the user manual.

Assuming you are using the S-video record output, taking a wild guess I would look at C373 (page 32) which is an electrolytic which has the Chroma signal going through it right before the final output buffer (Q360 etc.)

Edit to add: Failing that I would try the two composite outputs as they have a different siganl path. If one of them works that would narrow down the options.

I should mention both S-Video and Composite outputs on Rec Out 1 & 2 are affected with this problem. However, when the external camera input is the source that is faded in, the output is not green and is not as distorted, but the luma is not very bright and the color is still slightly off. I am not sure what that means for the circuit, but Ext. camera is treated differently. I can do other tests to see if we can narrow down where the faulty capacitor might be!

Three questions that would help narrow down the problem:
Have you tried the other source input?
Is there any difference between S-Video and composite inputs?
If you select the input from the other bus does it make any difference?

Sorry for the day late response, was glued to the TV yesterday. I tested it again, perhaps I mis-remembered, the External Cam input is equally affected with the problem. Also, it makes no difference between which output/type of output is used, and yes I’ve tried all combination of sources. In other words, all inputs/outputs are equally affected, so… I guess it is still more likely the problem is on the output side?

If it is the same on all inputs and both busses then I would assume it is in the output. There are lots of possibilities TBH, but C386, C373 and C370 and C383 look like candidates to me. BTW, the manual on the web is for a PAL verison. If you are NTSC then there might be other differences.

If you can debug with a scope and a schematic then IC360 pin 27 is the color output from the D to A. If that signal looks OK then trace it forward using the scematic until it goes bad.

interesting. have you successfully fixed a unit with that problem like that?

Nope. I am just looking at the schematic and, assuming it is a dead electrolytic, trying to spot which are most likely to disrupt the colour signal path.

can’t tell you how many people i’ve seen with this same problem. it makes me wonder if it would be cost effective for someone to start a business recapping old video gear.

I always suspect with jobs like that that if you priced labour properly people would be shocked at what you would have to charge. That is why most electronic repair businesses have disappeared or just swap-out whole boards with spares.

So far we are only assuming it is a capacitor - it might be other things, though caps are usually a prime suspect.

well, we know the capacitors are the components that wear out over time.
i guess it seems like, eventually we will hit a point where the only way to keep all these panasonic mixers and such running / renewed will be to do the replacement of all caps. but will it be worth it at that point? perhaps by then hdmi mixing equipment will be at the stage of affordability that SD equipment is now. (assuming the cycle we’re in continues.)

it was more a theoretical question than anything. i worked in a repair shop for years and i for one am not feeling like i’d want to be doing any cap replacement jobs at this point haha.

any luck with this? recently found a WJ-AVE7 with a similar problem. such a cool piece with awesome functionality. i will help if i can but i’m not super familiar with testing capacitors… and wow it looks like there’s a thousand of them.
my best guess is the problem lies in the video inputs, as you can fade to a solid color, and it looks correct.
update (4/15): found a repair shop local to me that works on vintage video gear - bringing it in today - here’s hoping!
update (5/6): repair shop found capacitors to be bad (expected) and did not want to recap due to time investment. I decided to order all the required parts and recap the whole board myself. I will let you know how I fare.

Hello, i found this tread intresting because i am facing the same problem.
Did you replaced the capacitors and if so whitch one, so i can do the same here.
Many thanks.