I’m looking to set up more of a ‘fixed’ AV setup at home, to let me route signals between my different effects boxes/TVs, etc. I’d really like to be able to patch things quickly and easily between them all, or to route the same signal out to multiple locations, etc. My first thought was a patch bay, but unfortunately most of them are 1/4" jacks, and RCA patch bays aren’t all that common. What are other folks using for similar setups?

One idea I had was to take a standard kind of AV switch, and combine it with a distribution amplifier and some kind of small DIY breakout box which I could install input and output RCA jacks onto, and then use that as a quick patching box. I’m not sure how that would be configured yet mind you.

A matrix switcher sounds like what you probably want. A Kramer or Knox or something. Basically like a patchbay, minus the patch cables, and with distribution amping built in.

That is… actually exactly what I want. Amazing. Thank you!

We use a mix of cheap powered splitters and cheap non-powered switches, and we use an Edirol V8 that probably saves some more of those)

To improve quality We were once suggested to use multi-input direct boxes (like this one I guess: https://www.sweetwater.com/store/detail/DI4800A--behringer-di4800a-professional-4-channel-active-di-box).

On the other hand, couldn’t one just use a patch bay + jack-RCA (or XLR-RCA) adapters? We use XLR cables for video (with XLR-RCA adapters) all the time.

On the other hand, couldn’t one just use a patch bay + jack-RCA (or XLR-RCA) adapters? We use XLR cables for video (with XLR-RCA adapters) all the time.

Yeahhh that was my initial idea, and something I might still try out at some point. I haven’t had great experiences with the quality of the RCA to Jack adapters though, and I’d need quite a lot of them for a 24 patch bay - which means the cost adds up pretty quickly.

For XLR… do you use XLR for all video generally? As in, if you run composite to composite devices, are you converting to XLR in between - or just in certain circumstances? It’s not something I’ve tried before.

p.s. I have an Edirol v4 (though I’ve seen a v8 for a good price and I am very tempted, even though I definitely do not need it). But… I do want a way to avoid the time base corrector in them, as it often blanks out glitches from my experience.

matrix switchers are great ! i have seen a lot of people using them for basically exactly what you described. you just patch everything into the back (usually with BNC) and then use the buttons on the front to select the routing.

if you want to go with a physical patch bay, they make them designed for composite video with a 75 ohm impedance. they usually have BNC on the back as well, and then in front they have what i believe are called WECO connectors, that are like long metal cylinders. so between 75 ohm weco patch cables and the bay it can get a little pricey, but they are pretty neat and really quick and satisfying to patch. you can also create a normalled default patch for when there is nothing plugged in. they have them at signal culture and also in the video studio at alfred university.

Smart! I think the composite patch bays are probably going to be harder to find. I wondered if there might be impedance issues with a regular bay. I picked up an 8 in and 8 out matrix switch for a good price (seems like you can get fairly huge ones for decent amounts too if you can put up with needing a controller rather than having actual buttons on the unit itself).

Looking forward to getting it hooked up! I’ll post pictures if I remember

There’s a 64 point teac RCA patchbay on eBay right now for $60 (but shipping is pretty high).

There were some Tascam branded RCA patch bays that are actually normalled, I’m guessing the Teac isn’t though.

I assume you could use single patch points for a composite signal and the RGB groups are jsut a visual reference. If I ws in the market for a patchbay for video I’d be jumping on that myself.

Matrix switches are great but they’re usually only 8x8 and that can be a bit limiting, plus the prices have gon up a lot from what I’ve seen recently.

EDIT: this looks really nice, toon but I’m pretty sure those are Bantam/TT jacks on the front, and you don’t want to go there unless you have a lot of money to spend.

Used longframe patchbays are a REALLY good value, but Bantam style patch cables can get pretty expensive. There are some Hosa cables that are around $10-$12 each, but it’s really easy to pay as much as $40 for a single short, used cable when you get into the higher quality stuff. I don’t mess with it, 1/4" is fine for me.

There’s a 64 point teac RCA patchbay on eBay right now for $60 (but shipping is pretty high).

I saw that! Sadly these are much harder to come by in Scotland…

Yeah shipping and VAT really makes it less of a value.

I’ve been digging into the long frame patchbay world this month (I pcked up a few nearly free years aog but only recently got into a situation where it was worht all of the effort to actually solder them up), maybe the answer is to go that route but get the parts separately? Find a cheap 1/4" lonframe patchbay locally and then source some of those BNC to 1/4" jacks somewhere? I don’t know how easy they are to find now, but normalling, 1/4", long frame, TRS, Switchcraft jacks are only about $5 NEW from what I was seeing, which is pretty cheap for how nice they are. I bet if you could find some used BNC rear to 1/4" front long frame jacks they’d be relatively cheap to ship overseas and not very expensive. You could get a few at a time, mount them on the front panel of any cheap 1/4" longframe patchbay (and sell the old jacks to help cover the cost, maybe) and you wouldn’t even need to solder like you do with audio jacks.

If you find one with the cables still soldered on the back you can salvage all of that to make patch cables. One of the $20 patchbays I’ve been lugging around also came with 42 1 meter pieces of Mogami cable on the back as a little bonus.

EDIT: cut out some of the bad info. Al of these use MVJ-3 jacks for patching, which is something I wasn’t familiar with since I mostly do audio. Still, VERY cheap used, even with overseas shipping. Here’s another one:

We will be very happy to help you with any issues. Interested in purchasing more than one?.

I don’t know how much MVJ-3 cables cost; I do know there are BNC to MVJ-3 adapters, so using one of these patchbays with cheap Monoprice BNC cables could be a really viable option.

EDIT: “midsize plug” is the patch cable format and they’re really expensive, of course. No sruprise considering those patchbays still retail for $1000-$2000 if you get them from a regular vendor instead of eBay.

Beyond impedance problems (which really can start to stack up), a patch bay set-up with audio bays can introduce termination issues as well (depending on what gear you have and how you set it all up). That being said, there seem to be plenty of examples of people using audio patch bays without trouble though, so it can definitely work.

FWIW, I’ve set up a video patch bay at a space I help run, using professional WECO video patch bays. I found some Canare units for next to nothing on Ebay and they came with the patch cables. I also built a lot of the backend cabling myself. 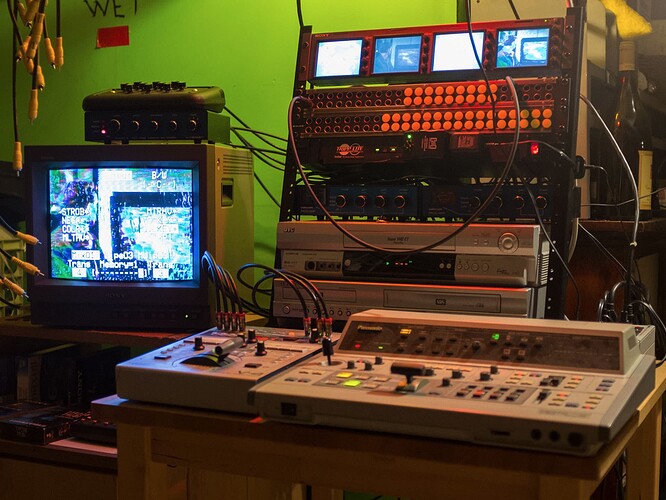 My experience with it has been mixed. Spent a lot of time setting it all up only to realize after using it for a while all the improvements I need to make to it. Really, now, I am likely to strip it down to something much simpler since I am mostly using my LZX modular rig these days (and most guests doing visuals bring their own gear).

Thanks so much for all the suggestions and tips/info here. Even if I don’t personally end up using them all right now, this kind of stuff is invaluable for folks getting into video work in the future. I spent ages reading back on all the old threads on scanlines, and it’s a great resource. It would be awesome to develop an increasingly lively online community around video art, as I have tons of questions ha.

Buying stuff from overseas isn’t a huge deal for me for the right thing, but the issue is generally customs/import fees. That can slap an extra 30% onto the total cost, which is tricky.

@sean I don’t really understand the impendance thing with regards to video anyway if I’m honest. My knowledge of engineering/physics is limited. Similarly: when you say termination issues, do you mean that it would eventually just drop out?

For now that 8x8 Matrix switcher I got, combined with the Edirol v4 and the inputs/outputs on my other gear should give me enough flexibility, but I’m going to consider the other patching solutions in the future.

p.s. That setup is awesome! Is it a live music space or something similar? I’m trying to find ways I can stack some of my gear, but most of it doesn’t have rack ears, and all the circuit bent devices have buttons and knobs all over the tops too which makes it tricky.

Yes, a live music/performance space: Betalevel. Though it has effectively been a studio/storage space for last ~21 months since hosting public events in a poorly ventilated basement has not really been a good idea.

My technical knowledge is a bit limited too. The way I understand it (which could be wrong) is that impedance mismatches are a little like connecting two pipes of different sizes. Whereas termination issues (generally some variation of having a cable connected to basically nothing) are like having a pipe that ends at a brick wall.

The first can often mostly be ignored, causing minor reflections that are not visible unless you’re running long cables or have lots of connections (as one would indeed have in a patch bay). Whereas, depending on device, an improperly terminated output can create serious distortion issues on other outputs.

One doesn’t typically run into too many termination problems until setting up something like a patch bay, where things are perma-connected. At least I never did.

This is the video patchbay I have which I bought off eBay a little over a year ago. It’s in one of my racks and works great in my setup. Sorry I don’t have a pic handy. Only problem is that the cables can be tricky to find but I got lucky on eBay with those as well. 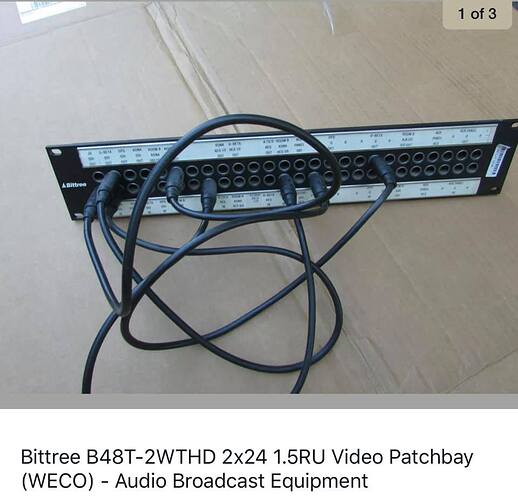 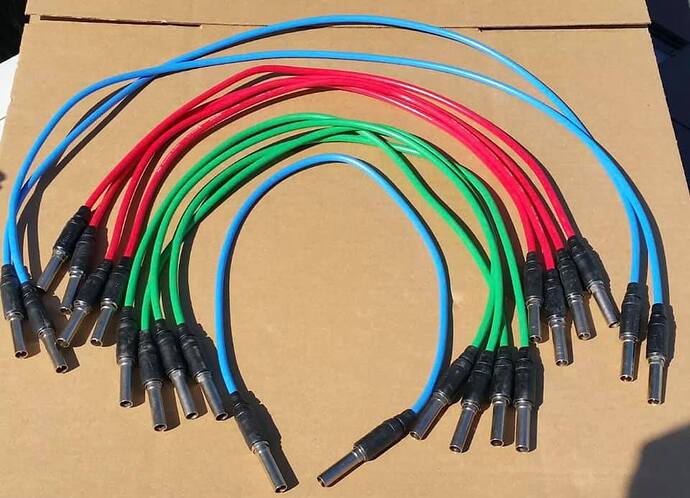 Got a Kramer 8x8 and it is awesome. Here is the current video rig now:

Still waiting on a few cables to arrive to patch in some more of the inputs, but other than that it is sweeet. I am half tempted to get a second one to allow me to do some REALLY crazy routing, but that would be overkill. I might keep an eye out mind.

Thanks for the help!

…nice - not necessarily portable though…

…i see a VMX410 on the first shelf left in there - do you have a manual for that? - i have the machine, but unfortunately no manual, so the machine is mostly unusable…

…nice - not necessarily portable though…