Setups/workflows to capture the highest quality version of your work?

I was talking to a friend the other day about noise scene stuff, and she was remarking about how musicians who are doing tape loops of dripping faucet sounds or whatever always take “getting serious about their music” as their cue to switch genres, but not finesse the art of tape loops of dripping faucet sounds. That got me thinking about my work, and what it would look like if I wasn’t recording everything to VHS and then digitizing in SD. So, basically, what would a clean HD version of my dirty images look like?

This wiki is a great start, but I’m wondering what setup/workflow y’all use to capture the highest quality version of your work?

Ah word, that’s a much more appropriate thread. I’m going to move this convo over there.

Pre-edit: copy and pasting this post from another thread.

I was talking to a friend the other day about noise scene stuff, and she was remarking about how musicians who are doing tape loops of dripping faucet sounds or whatever always take “getting serious about their music” as their cue to switch genres, but not finesse the art of tape loops of dripping faucet sounds. That got me thinking about my work, and what it would look like if I wasn’t recording everything to VHS and then digitizing in SD. So, basically, what would a clean HD version of my dirty images look like?

This wiki is a great start, but I’m wondering what setup/workflow y’all use to capture the highest quality version of your work? I have a BlackMagic Intensity, but that only captures in SD since I’m using SD outputs. I’m eyeing an Extron from the Hardware wiki, hoping that upscaling to component and then sending that component to the BlackMagic Intensity will not only allow me to capture in HD, but it will be a vast improvement over editing in SD and exporting in HD via Premiere.

if you capture in SD (which in digital means 720x480i) i have found its unlikely that one can really upscale more than 200 percent without seeing some artefacting. The best results will always be minimizing post processing and conversions i think. Options are: use a devoted hardware upscaler that then converts to a digital signal (decimator is recommended by many) and then capture the signal via SDI or HDMI. I recently did a test using analog video into a V4EX and using its onboard upscaling and deinterlacing to capture at 1280x720p through the black magic intensity shuttle (through HDMI and components you can do as high as 1080i at 60 fields or 1080p at 30 frames) and it was a pretty great trade off for looking great with a low effort on my end. I did not try doing a post processing doubling upscale off of that yet (going to 2560x1440p). examples of video captured from that are the color clips and stills on this page 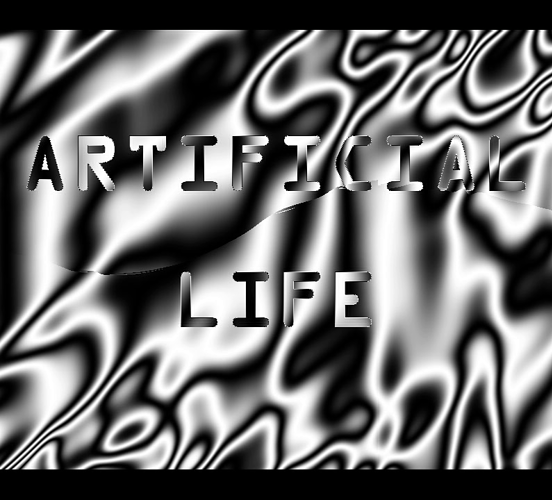 the thing to note about upscaling before capturing on the black magic is that it will still be encoded on the same chip, so if you find anything wonky about the color space transformations and overall lack of luminance depth those will still be issues at any scale.

a much simpler and more flexible live capturing set up is using a digital camera with decent enough shutter controls and the right kind of lens and just doing a rescan off of your best quality PVM (sony trinitrons are kind of my favorite for their sharpness and color. everything i did for the intermediale festival was captured using a panasonic gx7 at 1080p (i probabably could have done a way better job tbh but it was literally the first time i used the camera) and it looked pretty lush. as a bonus if you have a PVM with good controls you can basically dial in your signal for the capture method this method i think manages to preserve a lot more of the soft luminescence and vibrant saturation of the analog signals. (no matter how much i fuck with the black magic, the color encoding on that will always kind of confuse and dissapoint me). I don’t think i’m suppose to post anything from that session before the show but shh to don’t tell anyone here is a still (that was downscaled a bit for another reason) 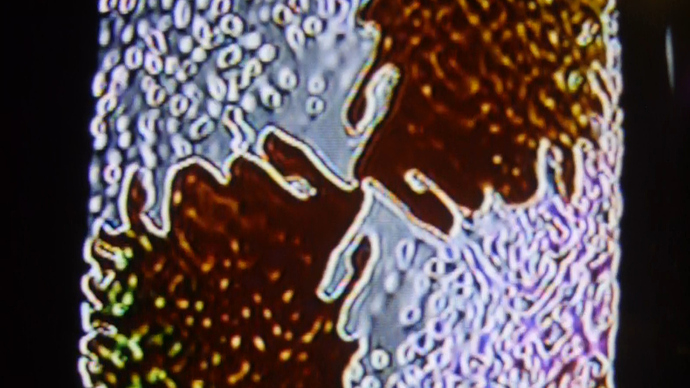 Thanks for the detailed response. Rephotographing the CRT is definitely something I’m no stranger to, but that being said I know the conditions that are required for it to look good (complete darkness, distance between me and the tripod to not accidentally nudge it with my stupid rolling chair, etc.), so I’d rather go with something that I can plug in and record at 2 in the afternoon.

I’m looking at the Decimator, it leads me to a noob question I’ve wondered for a while now… is SDI basically just BNC? So I’d be able to go from composite out to SDI using a BNC adaptor (or a composite to BNC cable?)

nope. BNC is a name for a type of coaxial connector. lots of signals can be sent over coax, including analog and digital video. sdi is a digital video signal format that is the current broadcast standard for routing unmodulated video signals

WRT timebase correctors, a lot of the standalone models have SDI output, so you can save some money and a generation of D/A and A/D conversion by just getting a suitable SDI interface rather than a capture device, as long as you have the drive capacity to handle uncompressed capture. I’ve ben doing all of my capture from tape through a For.a FA-370 TBC that was something like $40 in like-new condition a few years back and don’t even use the old Aja card I got when I started doing VHS archiving because it has to pass through the TBC either way. If I’d known in advance I could have gotten set up for about 1/3 what it cost.

For upscaling, some of the line doublers aimed at the retrogaming market are an option that could be worth exploring. OSSC is the most well known but it doesn’t accept composite or S-video. One of the RetroTink variants could be an option, though. Since they’re aimed at people who are trying to upscale video from problematic, off-standard sources with minimal artifacts they seem like a natural for the sort of stuff we’re doing.

EDIT: for downscaling (to use HD sources with SD equipment) the best price/performance I’ve found are the AverKey300 series VGA-to-composite/s-video boxes that were aimed at offices looking to hook up laptops to SD projectors or TV sets for presentations. They’re really common, quality is fine if it’s gong to be mangled anyway, and you can get them for $5-$10 complete in box if you wait around for the right price (or you could two years ago).

dont forget that any retro gaming based line doublers will be working at 320x240p so you will lose 1 field and half of the usual sd resolution. this can either be not an issue or a huge issue depending on what you want to capture.

The Retropi site claims their will line double 240p, 288p, 480i and 576i, and I think the OSSC will double a bunch of interlaced formats as well. But yeah, that’s definitely something that you’d want to double check with them, I haven’t had the chance to go through the full manuals and make sure that the output from a 480i source wouldn’t just be outputting deinterlaced 480p.

EDIT: you’re right, I skimmed the manual late the other night and misread - the 480i and 576i are just pass-through from what I can tell, so it wouldn’t be a good choice. Also double checked and I was misremembering the specifics of the OSSC - it will line double 480p to 960p but it won’t actually double 480i so again not really what we’re after here.

Thanks for pointing that out!

I’ve been using a TVone C2-2155 for DOWNscaling for a while now with good results and they are/were dirt cheap (around $20 shipped when I got mine) but their full blown scan converters that can upscale as well as downscaling are quite a bit more, even the older models.

The Extron IN1402 looks promising on paper and they’re not too expensive (there’s one on eBay right now for $40, and they claim it’s fully tested). The maximum resolution is 1365 x 1024 so it wouldn’t quite do 1080p but that’s close enough, as long as you had a capture device that was OK with it.

here to present an alternative viewpoint… i have the v4ex, and the decimator sdi/hdmi up/down/cross converter (plus blackmagic’s little analog2sdi box). all these ways of upscaling live have limitations compared to capturing uncompressed from the blackmagic intensity shuttle and upscaling in post. unless you’re doing live projections and need an HDMI output, there’s no advantage to hardware upscaling imo. you are just baking in decisions, where you could instead be deinterlacing, upscaling, etc. in the computer with way more control, better quality, and ability to undo.

the blackmagic intensity shuttle for me has been the sharpest capture method for preserving details. i usually upscale to 1280x960 or 1929x1440 in premiere, deinterlace to progressive, and convert to square pixels, by assigning these settings in the sequence and then scaling the clip to fit (often making it a little larger than the frame to remove any black border).

i hope it’s ok with everyone but i moved this to its own thread, since it seemed like a subject unto itself and might be difficult for people to find if it’s below other stuff in the wiki section. but if there’s any info from here that we want to integrate into the wiki guides feel free to do so.

I’ve been pretty happy with the decision to ditch computer-based capture myself. I do BM Analog-to-SDI into BM UpDownCross HD into BM Video Assist. Once you get it set up, it’s dead simple: turn it on, press record.

Sometimes I disable the UpDownCross, when I want some interlaced fun.

(And I do plenty of CRT rescanning as well, when I’m in the mood for more frustration/less predictability/potentially more beautiful results. Rescanning projections can also be nice.)

yeah once you get a press record and forget it type of setup it feels really nice.

but for a better quality captures I have been really enjoying the extron 300a > BMD hyperdeck shuttle 2.

I just did a ~16 minute video project for someone and the file was ~30 gigs and the final render only ended up ~2.3 gigs

i think for me there is one serious upside to doing hardware upscaling/deinterlacing before capturing: it saves time. I’ve only got 1 computer right now that is decent for doing heavy duty video editing and its a priority for me to not have it tied up doing renders for hours on end. my philosphy for both audio and video capturing is to shoot/capture/record with the need to do as little post processing as possible. a new workflow i’ve been working with is capturing on my pansonic gx7, running everything through batch converters in handbrake, and presto dunzo. still need to figure out the best screen i have for capturing off of, i think it might end up being one of my trinitron computer monitors but then i’ve got to work out the best vga conversion in the meanwhile lol

For older, dedicated line doubling/scaling units the Sony DSC-1024G looks pretty promising and they’re fairly inexpensive (under $100USD easily), anyone have any experience with this one?