Spirals, tunnels and other patterns seen while hallucinating. A math theory 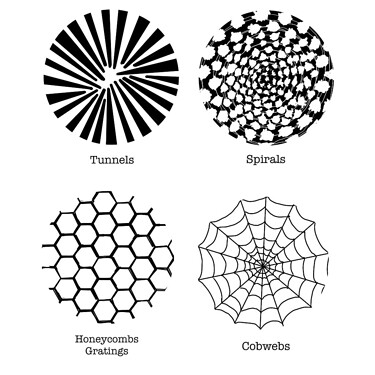 We recently learnt about the concept of Form Constants - geometric patterns that regularly show up in vision during altered states of consciousness. According to various studies, these patterns reflect patterns existing in the physical structure of the brain. This would explain why some hallucinations (including the “light at the end of the tunnel”) are common to all cultures.

(the following may be imprecise and badly worded, improvements welcome)

Everything the eyes see maps neatly onto the visual cortex (this is also mentioned in the article about migraine auras shared here some time ago by @jimboburgess). However the visual field has a circular shape, while the visual cortex works as a plane, so this mapping is a polar coordinate mapping.

When we look to a spiral or a tunnel, neurons in the visual cortex get excited in patterns shaped not like a spiral, but like parallel stripes.

What happens when altered states of consciousness cause neurons in the visual cortex to get excited in parallel stripes, in absence of visual stimuli? We “see” spirals.

Striped and spotted patterns are common in nature (look up “Reaction Diffusion”, there are also many online simulators). In some cases neurons behave following such patterns, which would explain why spirals and other form constant are commonly visualized during hallucinated states.

Uncoiling the spiral: Maths and hallucinations

A Math Theory for Why People Hallucinate

Video of a talk with slides:

Jack Cowan: Spontaneous pattern formation in large scale brain activity: what visual migraines and hallucinations tell us about the brain ()

thanks for gathering this info together @pixelflowers ! this is something i think about all the time

nice!
I spoke about this sort of thing a bit last week at Vectorhack & am really keen to understand more about it - so looking forward to reading your links

I was saying I thought that flickering oscillographics mapped to a deeply embedded fundamental brain thing we all have kind of in tune with brain frequencies. The oscillographics flickering on scope screens etc. could also be thought of as being made up of various form constants, so maybe that’s why we like them…

Derek Holzer pointed out to me that video artist Stephen Beck made a Phosphortron bitd, too: http://www.vasulka.org/archive/4-30b/Seno(9007).pdf