there has been a bit of talk about considering organizing some kind of video/audio livestream, perhaps a recurring monthly event where we would have a twitch stream embedded in the top header of this site. i just wanted to see if anyone would be interested in being involved in exploring that, and gather ideas?

i’d like to consider having a different person or people streaming in each edition. perhaps the first one could be some time in may. we could do live coding, analog video performance, sound performance with a visual component, etc…

maybe it could be called “streamlines” … haha

yeah i mean we could also just try n set up a zoom chat hang for like a round robin show n tell of what we are working on!

i feel like that would be a bit of a separate conversation … i am talking about more like one person or a group doing either a performance, or even a tutorial or demonstration of something, which would be public.

im keen to help with this - especially from an organising / technical side. (i had actually started loosely preparing a talk for our next VideoCircuitsBerlin meet before all the lockdowns started, maybe will want to share that too oneday)

i did some experimenting with embedding twitch streams in the header (i am procrastinating hardcore, if that isn’t obvious). it seems to work pretty well on both mobile and desktop. i created it as a “theme component” that can easily be turned on and off - here’s a sample of the styling - i used @andrei_jay’s channel as an example, but i also tested it with currently live streams from gamers haha. we can switch to point it to whatever channel we want each time.

with the header embed, the stream doesn’t reload even if you are navigating around the forum, which is cool. eventually, i’d like to explore using our own streaming server/infrastructure like @v3d mentioned instead of twitch - but to be honest, i don’t yet know how to do that, i have never even done a live stream before. but i think i will try a stream from analog capture soon, probably just with twitch and OBS to start, after i am done with school stuff.

i think we should probably wait a bit until we are ready to be slightly more public about this site to do a proper stream, but i just wanted to see how this would work. 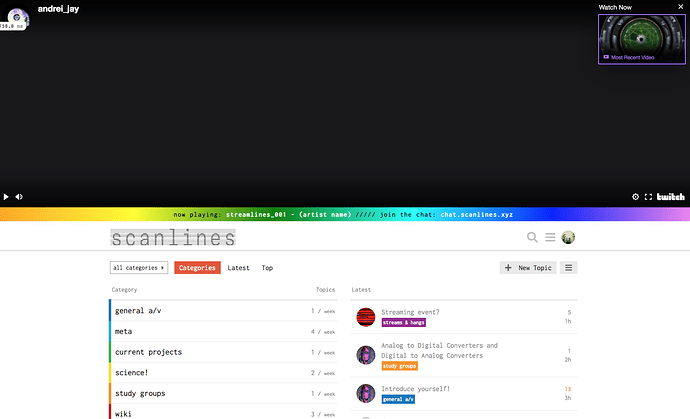 i mean if yr embedding my twitch u got to have a rainbow in there. i am notorious for my rainbow zones
do we want to try and pick a day and time for an informal stream hang in the next 2 weeks to work out any kinks that might come up?

i’d like to explore using our own streaming server/infrastructure

It’s not very difficult. Basically you setup an HLS streaming server with nginx, then stream to it from OBS. Nginx then remuxes the stream into a http stream that can be played in the browser, and optionally also restreams to Twitch / fbk etc.

It works pretty well, the latency is around 15-ish seconds.

Documentation around it is kinda scarce though, I found these in a Youtube video and worked around that. That’s why I planned to make a decent writeup but earthquake induced paranoia paired with a week in bed due to back pain got me sidetracked and now I have to do actual work.

@v3d
15 seconds is legit decent, thats pretty much twitch zones. what about the quality of video? the thing i’m happy about with twitch is that i can do incredibly busy stuffs with like every single pixel on each frame being in a different color space and with basically no perceivable compression blotching happening. in contrast to youtube or facebook which are kind of real rough for any complex video art even in SD

thanks @v3d for this info ! i’d love to give this a shot once i have a handle on OBS. it sounds like a good way to be able to embed video here without going through a 3rd party. this is something i’d like to learn more about !

@andrei_jay i’d also be curious to see how the quality works out. ultimately, we would have more control (and be able to get rid of their annoying UI elements), but we’d have to do more manual configuration. i’m curious about compression & adjusting for bandwidth on the user end (for example, at my job, we serve different quality renditions of pre recorded video based on the user’s connection speed). but maybe we wouldn’t have to worry about that if we just chose a modest but decent constant bitrate.

You setup the quality yourself. The server doesn’t reencode, just remuxes so it’s what you make it in OBS settings. I have nothing to compare it to since I never stremed on Twitch or Youtube (or anywhere). On top of not having to have their UI elements on our streams we’re also not pushing non-free javascript and tracking cookies on our users which is really importan imho.

its something i would like to learn more about also - documenting the process here would be a useful resource too.

Another idea: open source video conferencing solutions like Jitsi and BigBlueButton have a “share youtube video” option where one person can share a Youtube video and everyone watches it together. That might be a good way to simulate a room full of people watching a performance vs a standard streaming experience.
We already roll our own server (and would love to test the connection from the US) if someone is willing to test I’m here.

Setting it up is pretty trivial on newer Linux server distros.

once i’m past my current deadlines, i’d like to do some testing and server setup! hopefully we can test with streams from someone else’s internet connection, because i think my upload speed might be too slow (fluctuates about 1 megabit/s). but, hopefully i will be able to get back to the city and better connection speeds soon-ish … in the meantime, can def help from the server, embedding, and organizing sides.

2Mbit is miniumum for a decent bandwith / resolution stream, but hey you could always work the crappy compression into your aesthetic.