While I’ve been stuck at home like everyone else I’ve been working on getting PCBs and panels made up for some of the video modules I’ve designed. And now I’m finally ready to release them for other people to build!

The first five modules ready to go are:

I’ll write more about each one in it’s own separate reply on this thread, but if you’re impatient you can check out my web site at www.visiblesignals.net where I’ve already talked a lot about them. I like to type so there’s a few blog posts there where I blather on and on

I’d like to thank the Scanlines team for setting up a category for me here. I think Scanlines is great so rather than set up a separate forum I’ve arranged for this to be the ‘official’ place for public discussion of the modules and come and get help with them!

the new modules look great and so does the site ! very excited to start seeing some of these in action. thank you for putting this together and making it accessible and community minded, and congrats on the launch !

Thanks! Setting up WordPress and Woocommerce on the web site was as much work as designing the modules!

Posted about this over on the LZX forums too, but wonder if anyone else in the L.A. area wants to maybe get in on the pre-order together and split shipping costs?

(I’ll add that the shipping prices are totally fair, but shipping from overseas is simply never cheap.)

Yes, I wish I had cheaper options for shipping

That said, it’s incredible to think of the distances these boards will travel from me to you

Part of the reason why I waited was to get a few modules all ready to announce at once, so that people could grab multiple things at the same time and combine shipping!

Awesome to see these finally ready to go! I’m putting in an order from Indiana if any midwesterners want to go in together to save on shipping.

Can you elaborate more on how the Input and Direct Input parts of the RGB Matrix work, especially when either of them are set to the same bus?

I’m curious when putting a RGB signal into the Direct Input module (all pots CW) and setting it to Bus A, do those signals appear on the A Out RGB jacks without going through the circuitry on the Input modules and they are summed together with whatever else is set to Bus A?

What would show up on the A Out if both Input modules on the combo panel are fed the same signal and set to Bus A (assuming non-inverted switch and CW pots)? Do they just add together and clip at 1V? I wonder how many extra Direct Input and Input modules you had envisaged folks could practically add to one RGB Matrix before it becomes difficult to not blow everything out to whites on either bus.

Everything else seems pretty intuitive and appreciate the time and thought that went into this design!

good stuff Adrian!
I am exited about the Quarterizer . (and did a pre-order)

Sure! Both the Input and Direct Input modules mix their input(s) into the bus. The only difference is that the Input module has one signal input socket and controls for how much of the input go to each of the R, G and B channels, whereas the Direct Input module has separate signal input sockets for each channel. Both modules have a switch to select between bus A and bus B (each bus has R, G and B channels). I should draw a picture, that would make it clearer

The module works up to the power rails (minus protection 1N400x diode drop), so if you want to use it to mix signals that are over 1V or below 0V you can. The 0-1V “standard” mostly really only applies when you are converting to composite anyway, when voltages outside of that range are clipped.

So yes, if you feed the same 0-1V signal into two inputs and dial the channel levels both at 12 o’clock then the output will be 0-2V, and the brighter half of your signal will be full colour/white.

In practice, I think most people would rarely want more than two Direct Input modules, one switched to A and one to B (or both to the same channel to directly add (or subtract!) two images together). I use a Syntonie VU003 to input YUV source video into a Direct Input and then put my patterns into Input modules so I can mix them with the full colour image. Also because the levels on each colour of the Direct Inputs are individually adjustable, you can colourise the source video (e.g. add a blue tinge or remove all the red etc, or swap the inputs around for false colours, etc).

… I really need to knuckle down and do a demo video!

One of my goals is to build modules that emulate some of the functionality of consumer mixers, so we can do similar things but in the eurorack format.

I will sort them out this weekend!

I would suggest adding photos of built front panels of the Input and Direct Input expander modules to the RGB Matrix page. That would help folks easily grok the difference between the two.

really nice work @VisibleSignals ! and totally honoured to host the discussions around these modules here on scanlines

looking forward to building me some

Ordered! Any ideas when they are ready? Couldnt find a date

According to their blog:

Once the pre-order period is over (November 1st) I’ll see how many people want them and get enough made up, plus some more for stragglers. It usually takes around 1-2 weeks for the boards to get to me, so I’m expecting to post them out mid-November (after a quick check to make sure they’re all OK).

Oops - I didn’t realised I’d left that one off! I’ve added it now. Thanks for letting me know @sean. 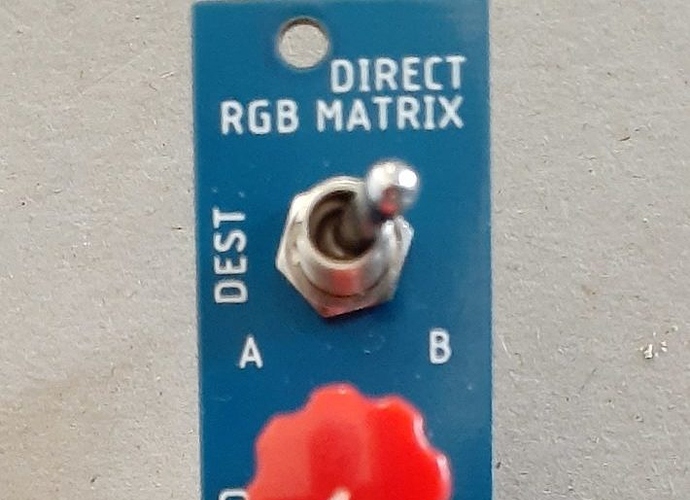 The latest version has .15" more space between the knobs - that’s the prototype and it was a bit awkward to use with them so close together.

Still don’t have a photo of the other, Input expander module though? I mean, I assume it matches one channel of the combo panel (the description on the page, below, says as much). But better to make that as clear as possible, right? Seeing is believing!

Yes, it does match. In fact, it uses exactly the same component PCB behind the panel

I’ve added this one too. Thank you, I appreciate the feedback!

Thanks for the detailed explanation!

One more question about RGB Matrix and then I’ve got one about Quarterizer:

When nothing is plugged into the inputs of either the Input or Direct In module, do the RGB controls on either of the modules act as offsets or are they only attenuators for incoming signals in both cases?

This is going to be so great for easily splitting patterns up into quadrants among everyone else you can do with it. I thought it was interesting you first tried to go for an 8 channel video quantizer like in the original Sandin IP or in the LZX Visionary 8 Stage Quantizer. Do you have any video of those experiments to share?

Also, is there a way to patch two of your Quarterizers to perform similar to those 8 channel variants in functionality?