I just recently got a hold of a Roland Edirol P-10 visual sampler, thanks to a very nice member of the video art community.

So far I’ve been recording directly into it from outside sources, but sometimes I have prepared clips that I’d like to use - but the P-10 is very picky about the files it will accept, and unfortunately the software to convert videos to its format is only supported on older versions of Windows/OSX. I could potentially use a VM, but I really don’t want to go through that hassle.

I am sure there must be a way to convert files to be the spec that the P-10 would like without that tool, but I’ve tried a bunch of different combinations based on the information in the P-10 manual and not had much luck at all. If anybody has any tips or suggestions I’d love to hear them!

Just to check did you try run the software in compatibility mode in Windows?

It says motion jpeg PAL/NTSC in the manual, you can use FFMPEG but getting the settings right could be tricky. Maybe handbrake can do it, have you looked at that?

edit: ok handbrake only does standard mpeg formats. Try FFMPEG GUI to try out some settings FFmpegGUI you can edit the box and command if any are missing for example the only have USA specific framerates, unsure if it needs to be interlaced (im guessing yes, but does MJPEG actually have fields?) or what the audio codec needs to be, needs to be trial and error or analyze files that come from the device.

Hey, thanks. I didn’t realise there was a GUI for FFmpeg, that’s dead helpful.

I’ll have a bash.

I am on OSX so I don’t have access to any Windows machines to try compatibility mode unfortunately. I found an old laptop which runs the software, but would be good to have a more stable longer term approach, so hopefully FFmpeg can do that! I’ll report back if I find anything.

Unrelated, but how do you like the P-10 VS something like r_e_c_u_r? I’ve been looking at it for the simplicity/durability/reliability and the neat package as I’m too lazy to print up a case for the recur.

r_e_c_u_r looks awesome. I haven’t used it personally, so I can’t speak to the differences there. The P-10 is often very expensive, but is built solidly, has a nice intuitive workflow, and the knobs let you change the speed etc of the clips quickly and easily. I’d be curious what interface folks are using for r_e_c_u_r, as that’d seem like the biggest stumbling block.

i started working on r_e_c_u_r originally because i wanted a p10 but couldnt afford one lol.

the speed /direction control of clips is one feature that i tried but mostly failed to replicate… im curious how long clips can be in p10 ? because the only way i could get this to work on rpi was by loading all the frames into memory, and this meant an upper bound of around 1-3minutes (could prob go longer if using the lower resolution that p10 takes but anyway )

i agree the r_e_c_u_r case is a hassle to print, and that the p10 looks like a nicer interface. there were plans to update the enclosure to make it easier. but tbh current r_e_c_u_r project is mainly deprecated - hasnt had any major updates in couple years. i will still make a few changes to that version, but now am working towards a new rpi4 instrument instead. with a focus on intuitive interface over feature saturation

but still i use my r_e_c_u_r at every show i play. it is extremely powerful if you can get your head around operating it. my interface setup uses a korg nanokontrol. looks something like this ( i dont actually use the i_n_c_u_r extension circuit w cv/pots pictured here for anything much ) 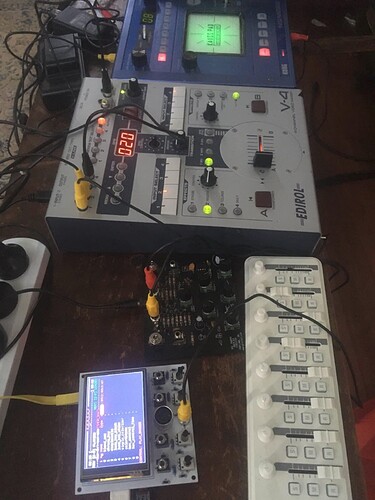 i have a p10, there’s actually an old mac version of the conversion software floating around somewhere, google it and I’m sure you’ll find it. it’s kind of a pain to use, have to convert files one at a time, rather than a batch. i tried my best to get the ffmpeg settings right, but the p10 seemed like it was looking for something very specific and would never load the files I converted. let me know if you figure it out!

Thanks for all the work you’ve done with recur, really appreciate it as a tool. I’d love to see the new project when it’s up!

What’s the white board you have your pi screen on with Composite out? If you sold little printed kits or something with better form-factor on etsy I’d be there just one to buy em. With the capture dongle, rca out, and nanoKontrol mine looks like a squid and I can’t keep my desk in order hahaha.

Thanks! I found the old Mac app, but unfortunately it doesn’t run on newer versions of OSX. I have an older laptop that I can use, but would be nice to find a longer term solution. I’ll keep experimenting and report back if I figure it out!

Hi all. I have had the P-10 for a while and it is such a fun little box/sampler. Regarding the length of the video you are only limited by the storage on the SD card. Regarding getting videos in to the proper format I have been using this software Movavi (I think there is a free version) and it works great and you can drop the file directly onto the SD card. Just need to assign them to a pad once you put the card back in the P-10. Here is a short demo I did of it to emphasize its real time features/effects.