Hi! initiating a lil introduction thread here. I’m Andrei Jay, i enjoy playing with video feedback systems in analog and digital realms. I’ve been messing around with video art stuff for maybe like 10 years now? got started partially through my habit of finding technology in the garbage and figuring out fun stuffs to do with it. I live in brooklyn NY USA rn and run like workshops and classes for video art stuffs out of my studio (phase.video). my interests include plants, science fiction, looking at clouds, and making cookies. Currently working on learning as much as i can about ADCS and DACS so i can build my own hybrid analog digital signal processing systems. Will soon be digging into FPGA so that I can start rigging up my own framebuffer systems as well. in the meanwhile still also working on seeing how much fun i can squeeze out of the raspberry pi system as a video art tool because its handy to have the adcs and dacs and high level compilers built in for ease of usage and also applying the stuffs i learned from that over to the jetson nano as well with the goals of having a robust and semi modular multi channel frame synchronizer/framebuffer/color space manipulator tool thats designed primarily for video art and not for broadcast zones and is also not like 50 pounds haha. would like to start up some study groups on here for signals and systems/digital communications/information theory/FPGA magic stuffs if anyone else is interested! 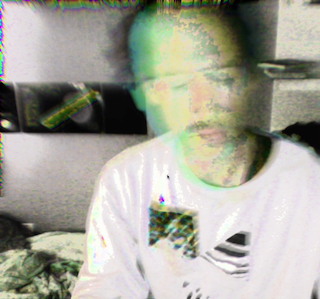 ahoy i am paloma, i think everyone who is here thus far knows who i am but i do work with video and sound and most recently have been experimenting with the crossover between electronic and physical processes and physics of light and sound as part of a thesis i am working on. lately, i’ve shifted main focus away from working with analog video signals and feedback loops, but those ideas are kind of what inform my thinking on everything.

i am currently quarantined by myself in my apartment and am going slightly insane (but not in the worst way). luckily have all my equipment and everything i need out here. 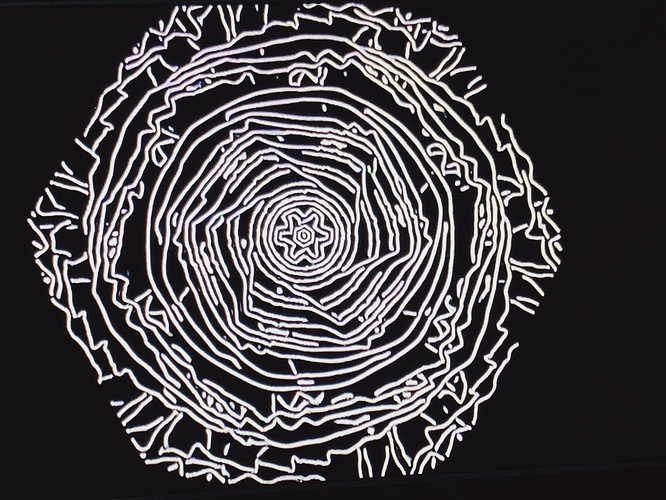 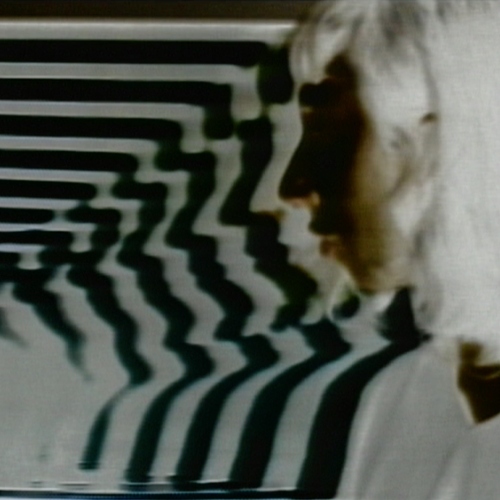 Hi guys! It’s Sara here! Ya all know me but for the sake of getting things popping off, I’ll do a little intro. I live in Chicago where I am currently teach high school kids virtually. I teach them about glitch art, new media, video feedback as well as English lit and Film Studies. I work with hardware and mixers to create video art and collaboration is my life blood! I am a poet and poetry was my first love and in some ways remains central to my craft. I enjoy mixing poetry with video and sound. I also love creating landscapes on my phone with various ios apps. I am always down to play and tinker with new tools and I like using what is around me. Lately I have become more interested in virtual reality and what can happen in those spaces artistically and socially. 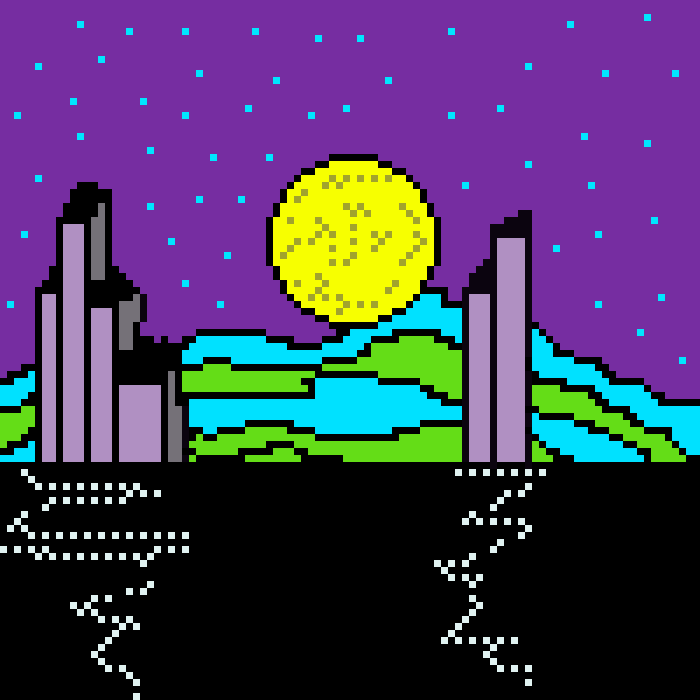 hello everyone ! this is tim. i am from new zealand but currently living in berlin.

these days i am mostly thinking about accessible and open source tools for video-artists. i have some existing and some upcoming projects im looking forward to discussing with you ! 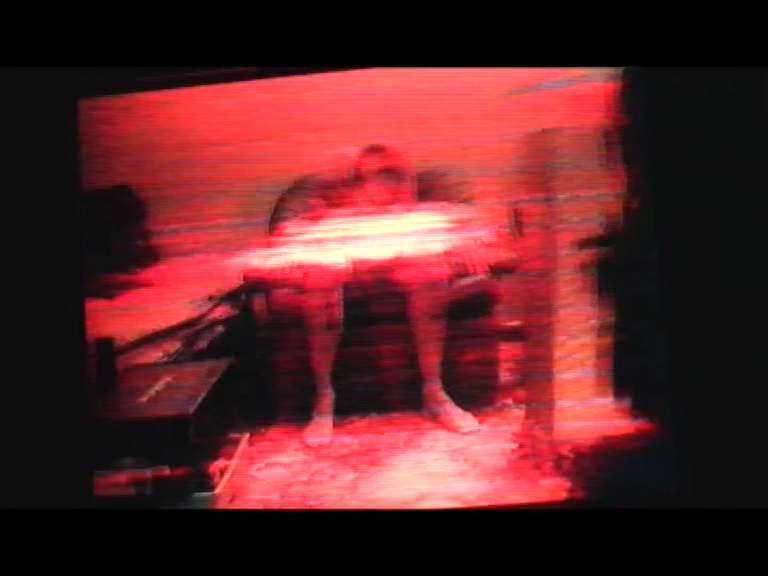 I work with computer code and live visuals, and I like making things that other people can use and interact with. Lately I have been especially interested in telepresence / internet video, unconventional computers, visual scores and notation, and learning about sound.

I have been living in Bogotá, Colombia for the past five years, but I just moved to Berlin about a week before everything went into lockdown.

I tend to be shy in forum-type things, but I am hoping I can get over it. :] 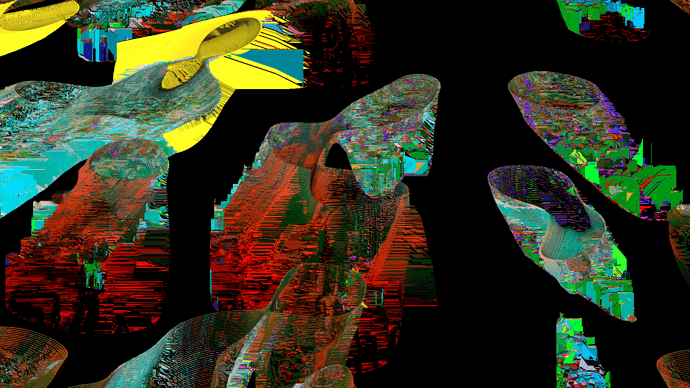 @ojack let us know if theres anything we can do as individuals or like in terms of how this community is set up to help you and anyone else who feels shy in these kinds of zones to feel more comfortable!

Hi I’m Vedran from https://fubar.space / https://pivilion.net / hacklab01(dot)org
I dabble in lots of new media type stuff but lately I’ve been doing nothing fun since all my gear is stuck in our space that’s been hit by an earthquake that happened in the middle of the pandemic we’re all stuck in. So there’s that.
It’s nice to be part of something outside of Facebook hope it catches on!

Have a random glitch! 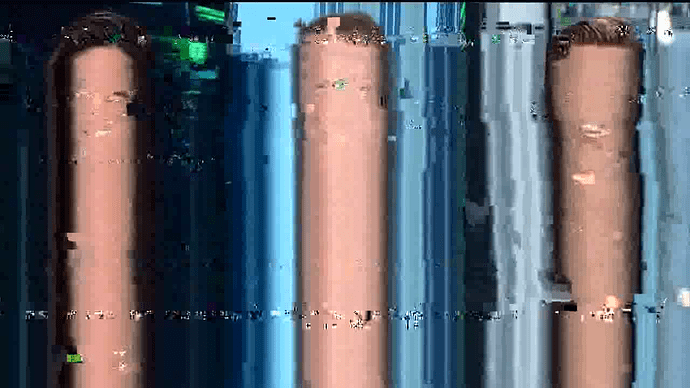 hi everyone!
I am sol sarratea, from argentina and right now in brooklyn. I do math and art, and converges in code.

i am kind of obsessed with feedback systems, and been working on making visualizations with shaders and webgl
https://visualizer.solquemal.com/
(and working on some notes to explain them https://solquemal.com/notes… is a still WIP)

i am interested in exploring ways of multi-feedback systems, though not sure if it is a concept i just invented, but if you are interested i can make drawings and give more detail.

lately i ve been studying discrete differential geometrty, reading about distributed systems, and wanting to implement some neural networks with cellullar automatas. 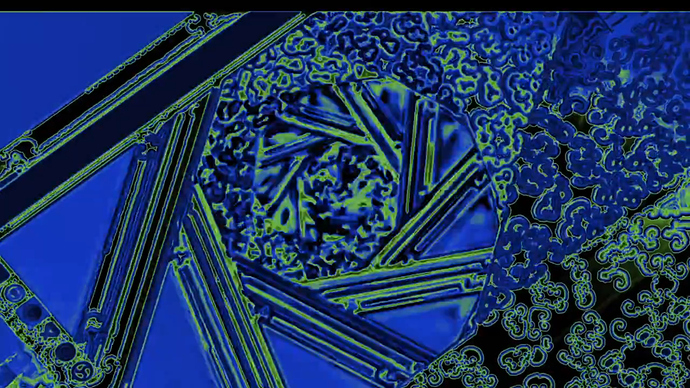 here is my selfie inside the Gray Scott visualizer: 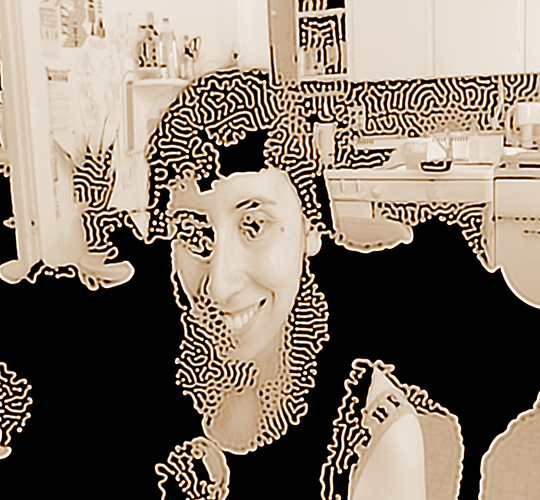 hello! this is gilbert (autr) - like everyone so far i also work with video, sound and am generally interested in improvisational tools, augmentation, experimentation, and with code-things am currently working with computer vision, ML, bodies / theatre. in berlin i put on an event video circuits berlin with @cyberboy666 where we meet up irl and talk about what we’re up to. i just moved into a new apartment, so in lockdown just trying to make things work with boxes and planks - attached are some screens from a session last week (and the odd selfie). hoping to share some projects in the near future, and looking forward to this being my new goto url! 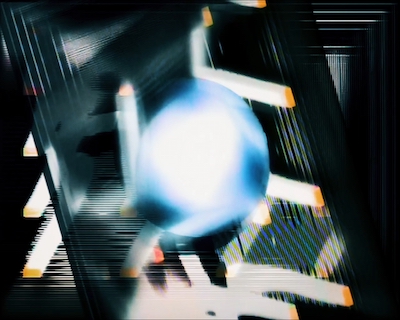 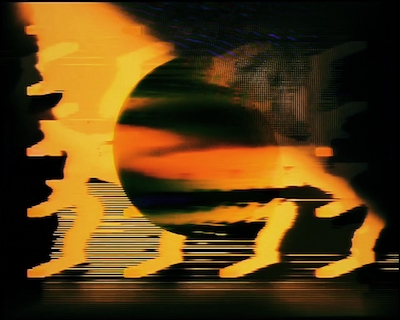 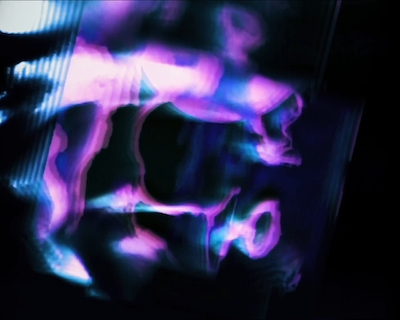 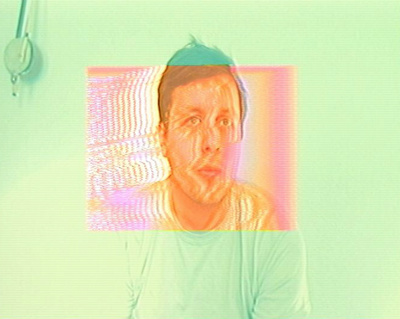 YEAY! you are the first one who is using it c:
it lives not only in my computer

Howdy Scanlines!! And thanks Paloma for letting me know about this project!
This is Kevin btw. I think most of you here know me as the creator of the Vsynth modular video-synth library for Max/Jitter. So, with that being said, YES, I love video feedback, I love cats and I’m all into online participatory culture. But Vsynth its not all, I actually have a lot of other works that go in a completely different direction. Maybe so as not to bore you I will leave all that stuff for for another time =). Anyway, I’m currently based in Buenos Aires but hopefully moving to Alfred NY in August to continue my researches. I might make a stop in Chicago and NYC before if everything cools down a little, hope to meet you guys there! Stay safe! <3

Hola! I’m Rodrigo (https://yecto.github.io/), I’m from Mexico, but I’ve been living in Montréal for 4 years, I really like to collaborate and explore sound, video - freestyle, I’ve been approaching code as expression, ever since I started writing code thanks to a fortuitous encounter I had with the live coding community in Mexico; I’m really interested in FLOSS art and community and writing as a way to express myself in different ways, lately I’ve been creating some explorations for collaborative writing that have a confluence with visual poetry and e-lit. I take a lot of inspiration from Náhuatl culture, graffiti, bolero, jazz and hip hop, feels really cool to approach these ideas/practices through writing algorithms. Thanks for creating this space, I really like the idea of sharing through other ways that are not the imposed ones, it feels like fresh air to read and share with all of you, thank you! 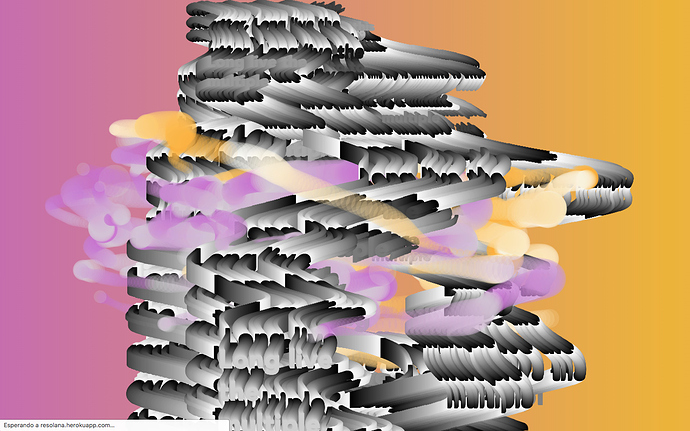 Hey everyone, I’m Bastien from France.

I first started taking interest in glitch art about the same time I started tinkering with DIY audio, so I slowly fell into the analog video/circuit bending feedback loop.

Talking with @v3d about the scarcity of old video gear in some places, found out that it would be easier to build a simple video circuit which could be circuit bent and made from common parts, which would also allow to do workshops more easily.

Fast forward, my phone is now filled with electronic component datasheets, service manuals and old electronic hobbyist magazine that I used to read on public transportation.

Thanks for setting this forum up! Had some regular talk with @cyberboy666 about hardware/software video, so it’s great to have a place where it can be shared and maybe be useful to someone else, and also less “monolithic”/hard to search than on facebook. 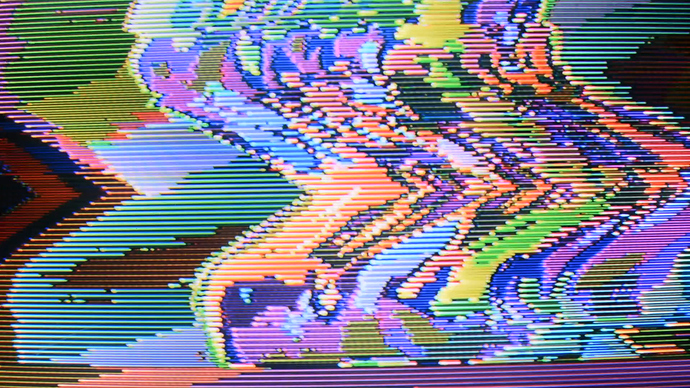 Hello everyone! I’m Martino, I’m 25 and I live in Italy.
I already met some of you at FuBar last year, and I love the idea of this forum!
I’m a psych rock musician and I fell into this analog video rabbit hole about two years ago after seeing BPMC’s site and Jason Galea’s work.
Since then I’ve started experimenting with video gear for music videos and live visuals, and I also began building my own little projects that I also sell on Etsy.
I try to keep my projects as inexpensive as possible to make them more accessible, and my goal is to promote experimentation and help people take the first steps into the world of video circuit bending and video art.
I think this a great opportunity to share knowledge and reach new heights together!

So… If I want to introduce myself do I reply to one of you here?

hi @schaferob and welcome! if you’d like to do an intro, posting in here like you just did is the way to go!

editing to add: if you want to upload an image or file, click this button in the editor:

there is a 3 megabyte size limit for files i believe, but if they are under that you can upload JPG images and PDFs.

I was quite lucky to be born the son of “The Father of Radio Automation.” (Yah, automation can be a bad thing. Buy a machine and fire the DJ’s.) But growing up surrounded by relays, tubes and capacitors, having a volt-ohm meter and a soldering iron. I can’t remember not knowing the resistor color code. Later, I built a lab full of test equipment kits and crucially, an oscilloscope.

At the University of California, Santa Cruz I fell in with the Electronic Music folks, some designing and building their own audio synths. From there I vectored off into experimenting with analog circuits colorizing video.

I was hired by the Lawrence Hall of Science above UC Berkeley to design and build three musically touch sensitive video colorizers.

Doinking around in my lab at home all that time. Designing HD analog video colorizers with modulation inputs (or trying to, anyway).

welcome @schaferob ! i have been enjoying your youtube series, and have seen your colorizer posts on Video Circuits. really amazing stuff! funnily enough i actually work for viacomCBS as my day job now (viacom before the merger) running servers for video encoding and tech stuff. i heard you stopped by @andrei_jay’s Phase Space studio! maybe i will see you there some time once hanging out in physical space becomes a thing again.